After a crushing 54-run defeat against Punjab, this match is going to be crucial for the RCB team to keep their playoff hopes alive. RCB is currently fifth in the points table with 14 points after winning 7 out of 13 matches. They are far behind DC in terms of net run rate. If the RCB team has to take its place in the playoffs, then it will have to win this match by a huge margin. Virat Kohlis poor form has been a matter of concern for the RCB team throughout this tournament, in this important match, the team is expecting big scores from him.

GT team, on the other hand, has performed exceptionally well in this tournament, winning 10 out of 13 matches, standing first in the points table with 20 points, and also the first team to qualify for the play-offs in this tournament. Opener Wriddhiman Saha is seen in excellent form from the GT team, in this match the team needs a bigger score than captain Hardik Pandya. The RCB team is competing against the strongest team in the tournament in this match, so the RCB team will have to unite and perform brilliantly in this match.

The Gujarat GT team was rated the weakest before the start of the league. But, the players of the team have achieved a miraculous victory with a united effort. Chasing 196 for victory in the previous match against Sunrisers, his position was poor but Rashid Khan, known for his leg-spin, showed the talent of the bat to lead the team to a miraculous victory. Titans have shown that if the top order fails, its lower order can also set the teams line across. Captain Hardik Pandya will expect the same performance from the players. Shubman Gill and Wriddhiman Saha have also scored runs in the top order. In the bowling, Mohammed Shami is taking wickets in the opening over. Apart from them, Lockie Ferguson and Rashid have also troubled the opposition.

As far as RCB is concerned, they have depth in their batting as well but the team is not able to perform together. Glenn Maxwell has also failed with the bat as well as the ball. Captain Faf du Plessis, Dinesh Karthik, and Shahbaz Ahmed have been able to score only but the pressure on them is increasing. RCB has Harshal Patel, the death overs specialist who has taken 12 wickets. Sri Lankas Wanindu Hasaranga has also shown his fine spin but the performances of Mohammad Siraj and Josh Hazlewood have not been anything special. 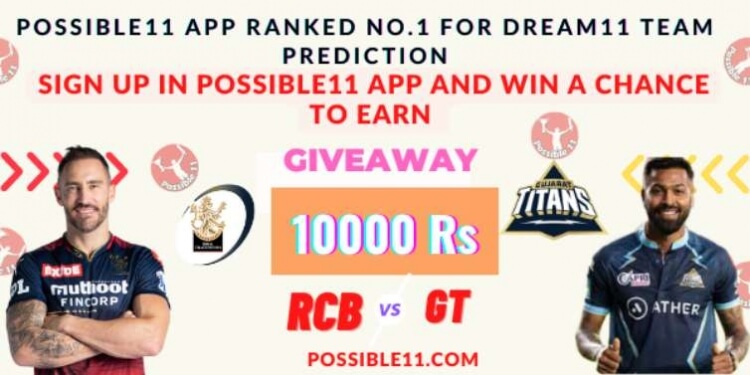 Wankhede pitch is considered more effective for batting. Here the ball hits the bat well. Also, due to the small boundaries in this ground, the batsmen also have an advantage. At the same time, bowlers also get a lot of help on this red clay pitch. This pitch provides good bounce to the bowlers. Due to which the batsmen dodge.

However, due to the small boundaries, sometimes even the total of 200 runs on this ground seems small. Defending the total at Wankhede is not an easy task. Also, it has been seen that the team chasing the target gets more success at Wankhede. Therefore, in the match between RCB and Gujarat (KKR vs RR), whichever team wins the toss, can bowl first.