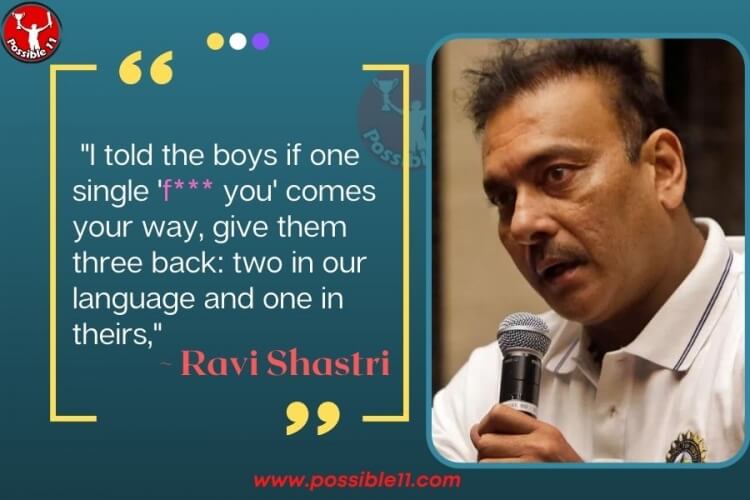 Ravi Shastris tenure as Indian cricket team head coach from 2017 to 2021 saw several highs with two successive Test series wins in Australia taking the cake. Shastri and Virat Kohli guided India to their maiden Test series win down under in 2018-19, and then the team also won their next tour to Australia in 2020-21. Both wins paved a new era of confidence for Team India, .

In his famous tenure as the head of the teams support staff, Shastri oversaw both of Indias historic Test series wins Down Under in 2018-19 and 2020-21 trips.

Speaking to the Guardian, the ex-India cricketer said the key was to give it back without mincing words and bully the bully irrespective of whether youre playing at home or away.

Ravi Shastri said he told his men to respond to the abuse and the naysaying in equal measure and get on top of the Aussies.

"...it was about attitude, especially when playing the Aussies. I told the boys if one single f*** you comes your way, give them three back: two in our language and one in theirs," Shastri, former Indian cricket team coach, told The Guardian in an interview.

Shastri said he wanted his team, along with skipper Virat Kohli, to pursue excellence on and off the field, and build a culture that helps them conquer territories in the Test match game.

"How many teams can win in Australia – beating an attack with Pat Cummins, Mitchell Starc, and Josh Hazlewood from 1-0 down – and then win in England? That will be hard for any team to replicate for a long time," Shastri said.

"...we knew winning in Australia or England wasnt coming with spin, it was fast bowlers, guys with aggression like Jasprit Bumrah. We were instrumental in making sure that guy played Test cricket. You dont even need express pace, you just need attitude," he said.

Ravi Shastri (on his coaching tenure) said, "in a country like India, theres always jealousy or a gang of people willing you to fail. I had a thick skin to hide". (To The Guardian).