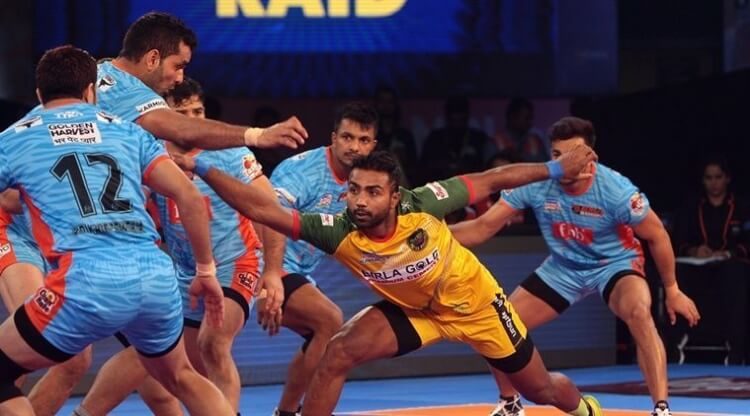 Sundays proceeding will begin with Match No, 43 between defending champions Bengal Warriors and a lowly-ranked Puneri Paltan outfit, which has failed to deliver despite some superstar names in the setup. Bengal Warriors havent been able to maintain the same dominance as last season and are undergoing a very bad patch, having lost 4 of their last 5 games. They will look to turn the tide through this game and rise from their 8th place. Puneri Paltan has failed to show any substance this season and is 2nd from bottom. They seemed to have missed the bus but would still want to end on a high.

Mohit Goyat: Mohit Goyat has taken up the lead role in the absence of the star raiders in the side and the youngster has done a fine job. He has 31 raid points to his name and will look to put in a fine show tonight.

Aslam Inamdar: In the absence of Tomar and the failure of Rahul to put up solid performances, Inamdar has stepped up and is delivering the goods for Puneri Paltan. The all-rounder has scored 32 raid points, while he has accumulated 11 tackle points. He was superb in the last game and will hold the key yet again in this game.

Maninder Singh: Maninder Singh is the top raider in the Bengal Warriors side and was one of the major reasons behind them lifting the coveted Season 7 trophy. The tall and strong raider ended last season strongly and has started this one well, registering 86 raid points in 7 games, including 14 in the last game. He has been superb in the last few games and will be key.

Maninder Singh has been on an absolute roll ?

Mohammad Esmaeil Nabibakhsh: Mohammad Esmaeil Nabibakhsh is the x-factor in the Bengal Warriors side. He can raid, he can tackle, and is just the kind of player every coach would want. The Iranian was the top scorer for the side in the opening game and has put in a fine show since. He has 32 raid points and 13 tackle points to his name. He has mostly been brilliant this season and would be eager to put in another solid show.

Abozar Mohajermighani: A strong defense is a key to putting pressure on the opposition and Abozar has added steel to the sides defense. The right corner defender is very neat with his tackles and registered 12 tackle points thus far. He will have a big role to play tonight