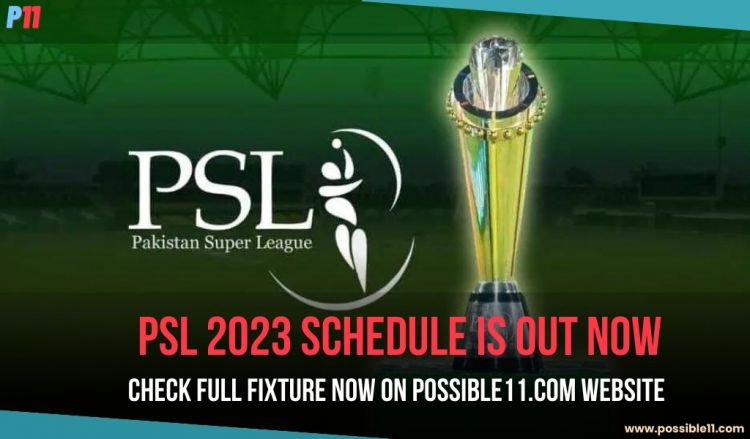 On Friday, January 20, the Pakistan Cricket Board (PCB) announced the schedule for the 2023 Pakistan Super League (PSL). The eighth edition of the tournament will begin with a match between the defending champions, Lahore Qalandars, and Multan Sultans on February 13. The final of the T20 tournament will take place in Lahore on March 19.

The Pakistan Cricket Board (PCB) announced the schedule for the upcoming 2023 Pakistan Super League (PSL) on January 20. The tournament is set to begin on February 13 and will conclude on March 19. Matches will be played across four cities: Karachi, Lahore, Rawalpindi, and Multan.

The opening match of the tournament will be between defending champions Lahore Qalandars and Multan Sultans, taking place at the Multan Cricket Stadium on February 13. Lahore Qalandars will have an opportunity to make history by becoming the first team to win back-to-back titles if they can defeat Multan Sultans.

The PSL 8 will be divided into two legs, with the first leg taking place at the Multan Cricket Stadium and National Bank Cricket Arena from February 13-26. The second leg will be held at the Gaddafi Stadium and Pindi Cricket Stadium from February 26 to March 19. This includes the qualifier, two eliminators, and the final, which will take place at the Gaddafi Stadium.

In addition, a soft launch of the Pakistan Women's League will take place during the PSL 8, with three exhibition matches being held in Rawalpindi on March 8, 10, and 11. The teams will consist of both local and foreign players, with more details to be announced in the future.

The schedule for the series has been announced by the Pakistan Cricket Board (PCB) on Friday, January 20. The tournament will start on February 13 and conclude on March 19. It will be played in Karachi, Lahore, Rawalpindi and Multan.

In a press conference, Mr Najam Sethi, Chairman of PCB Management Committee, said that he was delighted to formally confirm the schedule of the PSL 8. This will allow the PCB and the six franchises to start finalizing their respective event plans and objectives.

He added that the PSL 8 will be a massive event for the PCB, taking place at the four iconic venues with the world’s best T20 cricketers in action. The aim is to make the PSL bigger, better and stronger than ever before with the overarching ambition to make it the first-choice event for leading T20 cricketers.

Each of the six teams will enter the PSL 8 with a lot at stake. Islamabad United will aim to become the most successful team with three titles, Lahore Qalandars will attempt to become the first side to win back-to-back titles and the remaining four teams will once again attempt to put a hand on the glittering silverware. This makes for an exciting, enthralling and entertaining 34-match tournament.