The 16th match of IPL 2022 will be played between Gujarat Titans and Punjab Kings at the Brabourne Stadium in Mumbai. Both the teams will face each other for the first time in IPL. In this season, the team Punjab has won two out of three matches. On the other hand, Gujarat is the only team to not lose a match this season. Gujarat has played two matches and won both. However, the team under Hardiks captaincy is still not looking very balanced. Shubman Gill has played a good innings for Gujarat, but there is no other reliable batsman on the team.

Gujarat had secured a close win against Lucknow in the first match. In the second match, Delhi Capitals were defeated. Punjab chased down a target of over 200 against Bangalore in the first match while losing against Kolkata. In the third match, Punjab defeated Chennai by a huge margin of 54 runs. 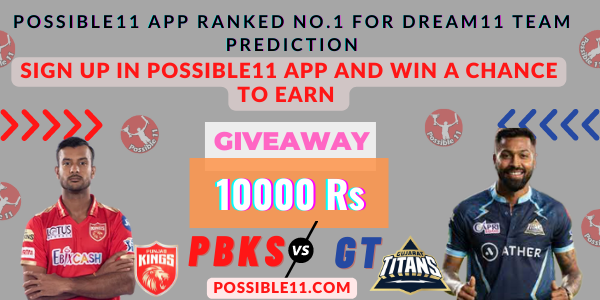 The batting of Punjab Kings this season is very strong. There is a lot of explosive batting in the team and there is a lot of depth in the batting order. Punjab has eight great batsmen, out of which seven have the ability to turn matches on their own. At the same time, Rabada is also doing amazing with the bat. However, Punjabs bowling is not that strong.

Punjab has two good fast bowlers in Rabada and Arshdeep and Vaibhav Arora was also impressed in his first match but Vaibhav lacks experience and cannot be trusted much. The responsibility of spin is on Rahul Chahars shoulders and the performance has been excellent, but there is no other spinner in the team. Liam Livingstone did well in the last match, but it is difficult to rely on him too much.

Talking about Gujarat, captained by Hardik Pandya, bowling is the biggest strength of this team. Gujarat has two excellent fast bowlers in Shami and Lockie Ferguson, who have the ability to take wickets consistently. At the same time, the most dangerous spinner of T20 is also present in Rashid Khans room in this team. Captain Hardik Pandya is also bowling with good pace and line length. Apart from this, Rahul Tewatia and Vijay Shankar can also bowl. For this reason, not more than 160 scores has been made against Gujarat in two matches.

On the other hand, Gujarats batting is very weak. Apart from Shubman Gill, no batsman has been able to play big innings. With the small contribution of many batsmen including Rahul Teotia, Captain Hardik, and Miller, this team has definitely won two matches, but this team can come under pressure if they get a big target.

Playing at a strike rate of 152 in the first match of the season, Punjab Kings wicketkeeper Jitesh hit 3 very beautiful sixes. His aggressive style can prove to be very helpful in getting points in todays match. In 55 matches of T20 career, Jitesh has a strike rate of 142. Keeping in view his big-hitting ability, Punjab has given Jitesh a chance in the team.

It could be beneficial to have Shikhar Dhawan, Shubman Gill and Bhanuka Rajapakse as part of Fantasy-11. Gabbar, who has scored 5,876 runs at an average of 127 in 195 IPL matches, can thunder in todays match. In the initial matches, it has been shown that the ball is coming on his bat in a manner. In such a situation, today he would not like to leave any stone unturned to win the team by playing big innings. Shubman Gill, who led Lucknow to victory by playing a blistering inning of 84 runs in 46 balls, will once again be ready to break the hearts of the fans of Punjab by wreaking havoc with the bat.

Gill has all those shots, which can give him a place in the top players of the coming times. IPL also holds special significance for Shubman in terms of his return to Team India. Bhanuka Rajapaksa started the season with an innings of 43 runs against RCB at a strike rate of 195. Then the hangover of the stormy innings of 31 runs against KKR in 9 balls has still not gone down from the hearts and minds of the fans. He was run out in the third match.

In todays match, making Hardik Pandya, Rahul Tewatia and Liam Livingstone a part of the fantasy team can prove to be a good decision. There will hardly be a better sight for his fans than watching Hardik Pandya bat at number four and bowl in the power play. Bowling at a speed of more than 140, Hardik, who is threatening the batsmen and forcing them to play on the back foot, is hitting a bouncer on the batsmens head after being hit by a big shot. It would not be wrong to say that Hardik is playing very hard. Even against Punjab, Hardik can change the course of the match with his performance.

Rashid Khan, Mohammed Shami, Kagiso Rabada and Rahul Chahar could be the key bowlers of Fantasy-11. Currently, Rashid, who is considered to be the best T20 spinner in the world, always guarantees points by being in the fantasy team. Spin magician Rashid, who has taken 95 wickets in 78 IPL matches at an economy of 6.35, has the power to create a ruckus in batting apart from bowling. Shami, who took 3 wickets in the power play for the first time in his career in the very first match of the season, can bring moisture in the eyes of the supporters of Punjab with his balls today.

A good batting track is expected at the Brabourne Stadium with the pacers likely to get some help early on. The ball should skid onto the bat nicely under the lights, allowing the batters to play their shots freely. The spinners should also get some help early on, but the dew factor will make it difficult for them as the match progresses. Both teams will ideally look to chase upon winning the toss, with anything over 170 being a good total at the venue.