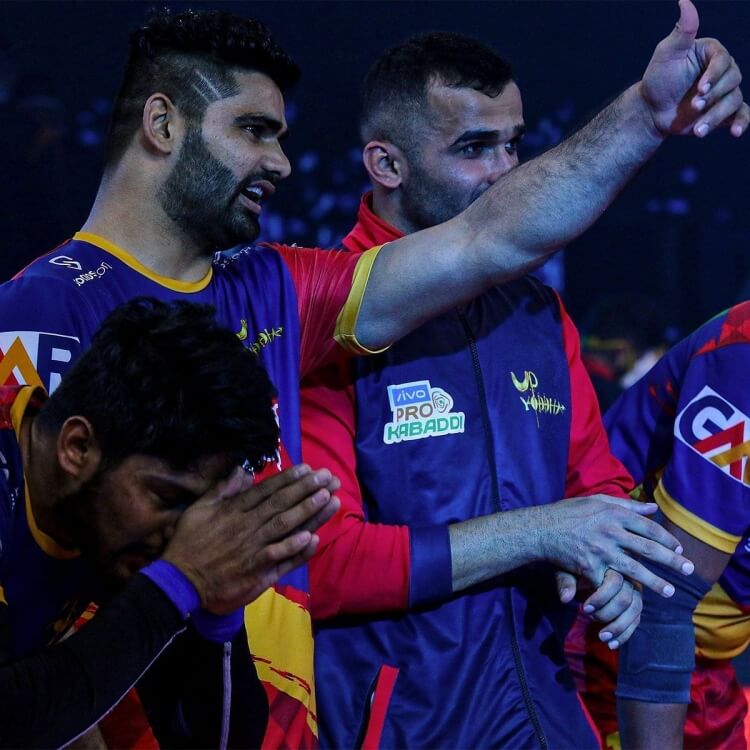 Expect fireworks when Patna Pirates meet Pardeep Narwals UP Yoddha in the first semi-final of the Pro Kabaddi League 2022 in Bengaluru on Wednesday.

The Pirates proved their critics wrong by finishing atop the league table. They qualified directly for the semi-finals with 16 wins, five losses and only one tied game. The Pirates are on song, managing four wins in their last five games, including a 30-27 verdict against Haryana Steelers in their previous fixture.

Meanwhile, UP Yoddha dismantled Puneri Paltan 42-31 in the first eliminator to enter the last four. They entered the playoffs after finishing third in the points table with ten wins, nine losses and three tied games. The Yoddhas have also won four times in their last five matches.

Patna Pirates and UP Yoddha have split their two meetings this season. The Yoddhas won their first battle 36-35, but the Pirates returned the favour by winning the reverse fixture 37-35. While the three-time winners will eye another final, the UP-based franchise will try to get a step closer to their first Pro Kabaddi League title.

Pardeep Narwal was at his absolute best in the last match against Patna Pirates, bagging 18 raid points, including three super raids.

PAT vs UP team Top Tips:

Sachin Tanwar: Sachin Tanwar is a quality raider and has been going well. He has looked in fine form lately, especially the last few games, where he really came into his own. Astring of fine performances ensured he takes his tally past the hundred and fifty mark to157 raid points. He has also added 7 tackle points. He will be a big player in this game.

M Chiyaneh: Chiyaneh is just the kind of player you need in the side. The Iranian allrounder doesnt shy away from putting in a tackle and is a proper team player. He has been sensational lately and has wreaked havoc. He has established himself as one of the best defenders this season and the leader of Patnas defense has taken his tally to 81tackle points. He is leading the charts for his side and is 2nd overall, just a point shy of the top-scorer and will be eager to get another big haul tonight.

Monu Goyat: Monu Goyat is an experienced player and will be a pivotal figure in the Pirates raiding unit for this big game. He has been rotated well by the coach and will befresh for the game. He is a crucial player and can add value to both departments. He will be keen to add to his tally of 77 raid points and 16 tackle points.

Surender Gill: Surender Gill put in some fine performances last season which entrusted UP Yoddha to retain him. The youngster Gill has been superb this season and took the mantle in light of Narwals struggles early on and is playing second fiddle now. The 23- year-old has taken his tally this season past the hundred and fifty mark, claiming 188 raid points, and has also produced 9 successful tackles. He will have a big role tonight.

Pardeep Narwal: Pardeep Narwal is the talisman and though he took his time to settlethis season, he is back to his best. He has been sensational lately and was the match- winner for UP in the Eliminator. He bagged 18 raid points in the last game in what was one of the top performances of the season. Patnas defence has stood tall so he might have a hard time but these are the situation he was bought for. Hed look to add to his tally of 184 raid points.

Sumit: Sumit is another solid defender in the UP Yoddhas side and has put on a goodshow. The left-corner defender has been a stellar performer and has 61 tackle points to his name. He has bounced back brilliantly after a poor game in between and would beeager to continue the fine run.