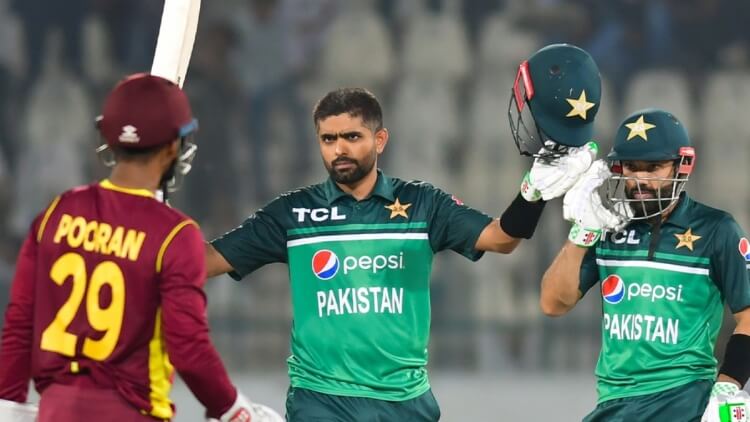 PAK vs WI, 2nd ODI Highlights: Mohammad Nawaz starred with the ball as Pakistan bowled West Indies out for 155 to register a 120-run win that saw them take an unassailable 2-0 lead in the three-match series. Nawaz finished with brilliant figures of 4/19 from his 10 overs. The spinner dismissed Brandon King before getting the big wickets of Shamarh Brooks, Rovman Powell and Nicholas Pooran in quick succession to leave the visitors reeling. Shadab Khan and Mohammad Wasim then struck twice each to help seal the win for the hosts. Earlier, Shaheen Afridi removed Shai Hope in the first over of Windies chase of 276, but Kyle Mayers put the pressure back on the bowlers with his 25-ball 33. However, he was dismissed by Mohammad Wasim and in the very next over, Brandon King fell for a duck to Nawaz. Pakistan had reached a total of 275/8 in their 50 overs thanks to half-centuries from Babar Azam and Imam-ul-Haq. Babar Azam fell for 77 off 93 deliveries as he missed out on equalling Kumar Sangakkaras world record of four consecutive ODI centuries.

Pakistan win the second ODI by 120 runs and seal the series with a game to go. West Indies bundled out for 155 in reply to Pakistans 275.

The No1 & ICC Mens ODI Cricketer of the Year for a reason ?#PAKvsWI pic.twitter.com/2MtCTJDnB9

Babar Azam, the skipper of Pakistan, says early on, the wicket was two-paced so they just wanted to build a partnership. Adds that due to the middle order collapse they were short of a few runs. Regarding Khushdil Shah, they wanted to give him the finishing role but he applauds the tailenders for scoring crucial runs. Shares that he knew their spinners will get purchase and lauds the way they bowl.

Nicholas Pooran, the skipper of West Indies, says that it was a tough game for them. Tells that they gave away 20 runs extra and adds that the conditions were tough. Mentions that their death bowling has been an issue for quite a long time and they are a young team and hopefully they will improve. Tells that credit should be given to Nawaz for the way he bowled and the conditions were tough and they needed to build partnerships and there were many soft dismissals. Hopes that they will learn from the experience and come back better in the next game.