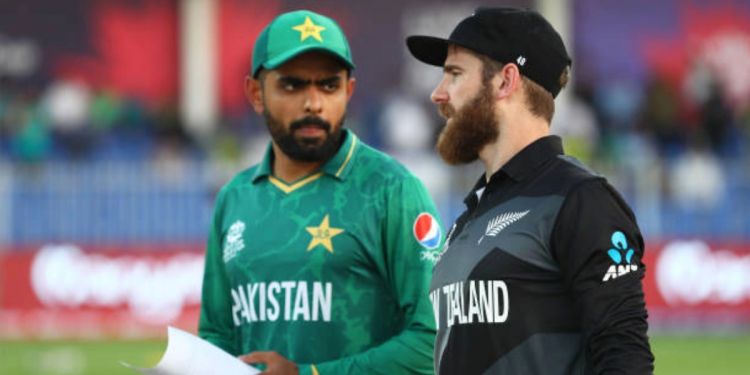 The first semi-final match of the T20 World Cup between NZ vs PAK will be played on 9 November at the Sydney Cricket Ground (SCG), Sydney, Australia. This match will start at 01:30 AM(IST).

New Zealand vs Pakistan: This is the first semi-final match of the T20 World Cup. Comparing the performance of both the teams in this tournament, the New Zealand team has performed brilliantly, winning 3 out of 5 matches, and is at the first position in the points table with 7 points (Group A). For the New Zealand team, Mitchell Santner, and Glenn Phillips have been seen in a very good rhythm in this tournament so far. The team is expecting a good performance from him in this semi-final as well.

On the other hand, after a poor performance in the initial matches, the Pakistan team has managed to make its place in the semi-finals by defeating the Bangladesh team by 5 wickets. Shadab Khan and Shaheen Afridi have performed well for the Pakistan team so far. In this match, the team needs a big score from its leading batsman Mohammad Rizwan, Babar Azam. Both the teams, performing brilliantly in this semi-final match, will enter the field with the intention of winning this match and making their place in the final.

NZ vs PAK Head to Head: 28 T20 matches have been played between New Zealand and Pakistan, in which the result came out. Pakistans record in this matter is quite good, 17 times Pakistan has won, while 11 times New Zealand has won the match. Significantly, in this T20 World Cup, there was a great performance from New Zealands side. New Zealand started this tournament with a win. During this, the Kiwi team started their campaign by defeating Australia. While Pakistan had a very bad start, the team had to face defeat in the very first match against India. Even though the Pakistan team had a bad start, the team won the semi-final ticket by winning two consecutive matches at the end.

The sky will be very clear, and there is no chance of rain. The temperature is expected to remain at 22 degree Celsius.

Shadab Khan The experienced bowling all-rounder of the Pakistan team, he performed brilliantly in the last match, taking 2 wickets, so far in this tournament, he has taken 10 wickets in 5 matches and has also scored 78 runs. In this match, he can be tried as a captain in the dream team.

Shan Masood So far, Pakistan is the highest run-scorer in this tournament from the team, it has scored 134 runs in 5 matches so far. In this match too, he can contribute well with the bat.

Shaheen Afridi From the side of Pakistan team so far in this tournament is the best performing bowler. Showing economical bowling, he has taken 8 wickets in 5 matches. In this match too, with his bowling, he can get good points in the dream team.

Mohammed Rizwan This is the wicket-keeper batsman of the Pakistan team, so far he has not been able to perform according to his ability in this tournament. He has scored 103 runs in 5 matches, in this match he will be the first choice of the people in the dream team from the wicketkeeper category.

Michelle Santner New Zealand teams leading off-spin bowler Mitchell Santner has so far taken 8 wickets in this tournament and scored 27 runs in this match, he can be tried in the dream team as captain.

Devon Conway The wicket-keeper batsman of the New Zealand team has scored 124 runs in 5 matches played so far and can score big in this match as well.

Tim Southee The experienced fast bowler of the New Zealand team has taken 7 wickets in 5 matches played so far, this year he has performed very well, in this match also he can get good points in the dream team. 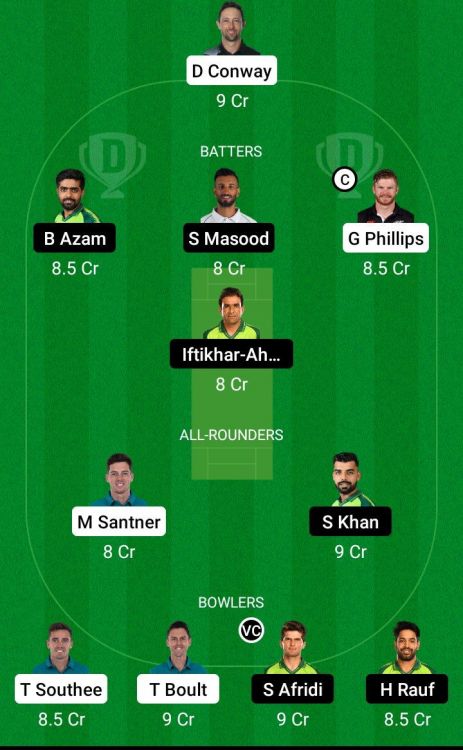 If we look at the last few matches, the fast bowlers get a lot of help on this pitch, the average score has been between 142-159 runs on this ground. Glenn Phillips, and Kane Williamson can prove to be a good options in this match as captain and vice-captain in the grand team.

New Zealand vs Pakistan Who will Win

NZ vs PAK: NZ team has more chances of winning the match. They seem to be a much stronger team in this match.