Most Successful 300 Plus Run Chases in ODIs by Teams 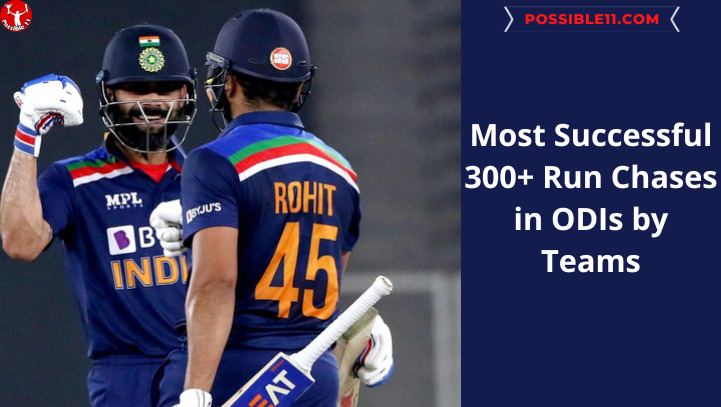 Most Successful 300 Plus Run Chases in ODIs by Teams, Teams with most 300 plus Run in ODI cricket

Most Successful 300 Plus Run Chases in ODIs by Teams

Chasing a target of 300+ in the ODI cricket format has become a casual thing for many teams in the modern cricket era. Talking about the first, scoring more than 250 seems to be a good target for the team. Over time, chasing 400 plus runs in the ODI format has become something that can be achieved. Statistics show that while chasing the most runs in the format of ODI cricket, the team batting second has won more than the team batting first.

India and West Indies have scored a lot of runs in the ODI series. Till now no other batsman other than Shai Hope has been able to score a century, but more than 300 runs have been scored in every innings. The special thing is that Team India has managed to win both the matches by a close margin. The Indian team has made a special record in this series. Team India is the first team in the world, which has won 20 matches chasing the target of more than 300 runs. No team is even close to India in this matter.

Teams with most successful 300 plus run chases in ODI

Teams with most 300 plus totals in ODI cricket

A score of 300 in one-day internationals has become quite common now and as earlier this score was considered a measure of victory, nowadays no score is safe. Till March 2006, no team had scored 400 even once, but since then it has scored more than 400 scores 20 times. Australia had scored 400 for the first time and in the same match, South Africa also registered a historic victory by scoring 400.The score of 300 in one-day internationals was first scored by England in the 1975 World Cup against India. Lets take a look at the number of times which teams have scored 300 in ODIs so far