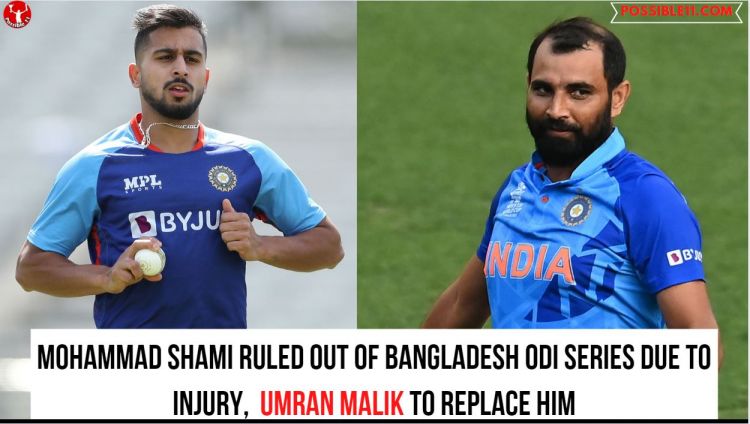 Mohammad Shami ruled out of Bangladesh ODI series due to injury, Umran Malik to replace him, Can also be out of the test series

India vs Bangladesh 1st ODI Indias experienced fast bowler Mohammed Shami has been ruled out of the ODI series against touring Bangladesh due to a hand injury. The three-match ODI series will begin on Sunday at the Sher-e-Bangla Stadium in Mirpur.

Mohammad Shami ruled out of Bangladesh ODI series due to injury

The Indian team is currently on a tour of Bangladesh. Team India has to play a three-match ODI series against Bangladesh from Sunday. Before this the team has suffered a big setback. Indias experienced fast bowler Mohammed Shami has been ruled out of the ODI series against Bangladesh tour due to a hand injury. The three-match ODI series will begin on Sunday at the Sher-e-Bangla Stadium in Mirpur. Shami was part of the team in both ODIs and Tests and was set to represent the fast bowling in Jasprit Bumrahs absence, but the pacer did not travel with the Indian team to Bangladesh on 1 December due to an injury.

A senior BCCI source in the know of the matter told PTI, “Mohammed Shami has sustained a hand injury which occurred after he started training after the T20 World Cup in Australia. He has been asked to report to the NCA and has not traveled with the team on December 1.

Umran Malik to replace him, Fast bowler Umran Malik has been included as a replacement for Mohammed Shami. BCCI gave information about this by tweeting. BCCIs medical team will monitor Shami. Malik was part of Team India on the New Zealand tour. Umran was part of Team India in the T20 and ODI series against New Zealand. He bowled brilliantly on this tour. He was the highest wicket-taker for Team India in the ODI series. He took three wickets in three matches. 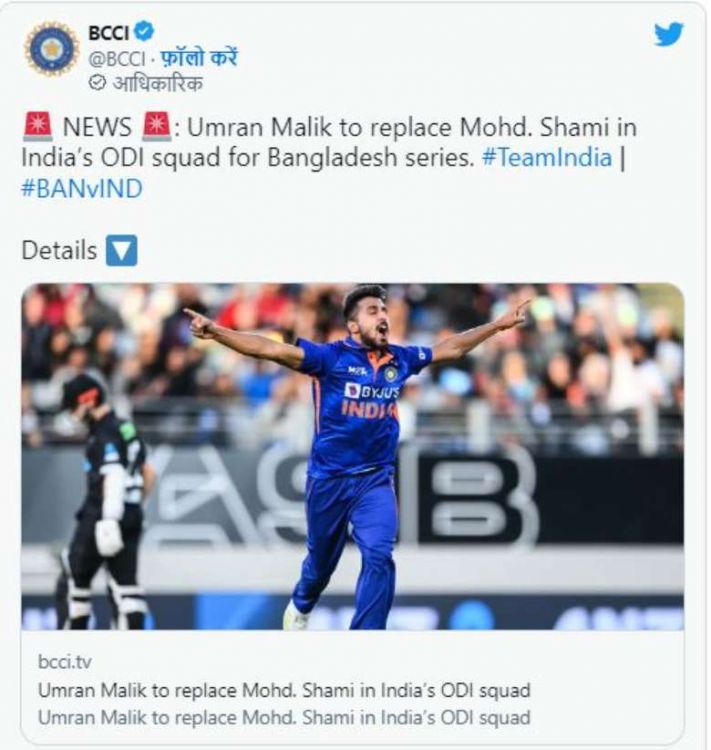 Mohammed Shami may also be out of Bangladesh Test series

Can also be out of the test series, However, if Shamis injury is serious and he is unable to take part in the two-match Test series starting December 14, then some other bowler may be given a chance. The source said, “Shamis absence from the three ODIs is certainly a big loss, but the bigger concern is his possible absence in the Tests, where he has to lead the bowling in Jasprit Bumrahs absence. If he is out of the Test match also then it is a matter of concern for India.

The Indian team is currently in Dhaka and on Friday the team took part in the practice session. Most of the players were present in it. With this series, the Indian team will start preparing for the ODI World Cup to be held at home next year. All eyes will be on the Indian top order. Rohit and Rahul have been going through a bad run of form of late. In the recently concluded three-match ODI series in New Zealand, Shikhar Dhawan led India in the absence of skipper Rohit and vice-captain KL Rahul.