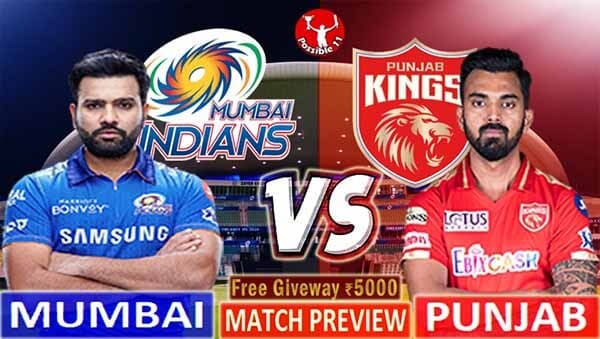 IPL 2021, MI vs PBKS: Mumbai Indians team will take on Punjab to get back on the winning track. The performance of Punjab has also been mixed. Both the teams would like to improve their position in the points table.

ABU DHABI: After three consecutive defeats, defending champions Mumbai Indians swashbuckling top-order batsmen will have to rectify their mistakes in their IPL match against Punjab Kings on Tuesday and get back on the winning path, or else it will be too late. Mumbai has slipped to seventh place after losing all three matches since the resumption of IPL in UAE. He has eight points from 10 matches.

Mumbais team could not chase the target against Royal Challengers Bangalore and Chennai Super Kings while they lost against Kolkata Knight Riders by batting first. The batsmen of the five-time champion team have disappointed. Young batsmen like Suryakumar Yadav and Ishan Kishan are not in form. Captain Rohit Sharma scored 33 and 43 runs in the last two matches but could not convert good starts into big innings.

Hardik Pandya returned to the team after being out of the first two matches but could not do any wonders. These players are also part of the Indian team in the T20 World Cup and their poor form is a matter of concern. The T20 World Cup is to be played in UAE and Oman just after the IPL.In bowling, Jasprit Bumrah has taken eight wickets in three matches but Trent Boult and Adam Milne could get only three wickets. Spinners Rahul Chahar and Krunal Pandya have been disappointed.

Punjab, on the other hand, is at the fifth position, who defeated Sunrisers Hyderabad in the last match on the back of their excellent performance by the bowlers. They too have eight points from ten matches and are in no position to shy away in the coming matches. Punjab has top class foreign and Indian players but this team has never been able to perform consistently.

Punjab team could not score four runs in the last over against Rajasthan Royals. After that made three changes in the last match and got the win.Under captain KL Rahul, Punjab has good batsmen. Apart from Rahul and Mayank Agarwal, the batting looks strong with Chris Gayle, Aiden Markram, and Nicholas Pooran. In the last match, however, he could not adapt to the slow pace of Sharjah, after which Rahul also tried to learn the skills of batting according to the pitch. Mohammed Shami and Arshdeep Singh did well in the bowling while spinner Ravi Bishnoi, who was included in the team in the last match, grabbed the opportunity by taking three wickets.

Mumbai Indians vs Punjab Kings Pitch Report: Mumbai Indians (MI) and Punjab Kings (PBKS) will clash in the 42nd match of the Indian Premier League today at 7.30 pm. Both the teams will face off at the Zayed Cricket Stadium in Abu Dhabi. This is the 11th match for both of them in the current season. At the same time, in the second phase, Mumbai will be fourth and Punjab team will take the field for the third time. Mumbai has performed disappointingly in the UAE and the team is yet to win a match. He has 8 points from 10 matches and is at number seven in the points table. At the same time, Punjab is at the fifth position in the table with 8 from the same number of matches.

What will be the pitch of Zayed Stadium

In the current phase, there has not been much fanfare in the Zaida Cricket Stadium. Here the score of the teams has reached beyond 170 in just one match. Four matches have been played in Abu Dhabi, of which three matches were won by the chasing team. Talking about the pitch, the fast bowlers have got a lot of help. It is not easy for the batsmen to score runs freely on this ground. However, once the batsman settles at the crease, it can create trouble for the bowlers. In such a situation, it can be expected that there can be tough competition in Abu Dhabi. Let us tell that both the teams have clashed 14 times and have won 7-7 matches.

How will the weather of Abu Dhabi be

When the players of Mumbai Indians and Punjab Kings take the field, the weather will be clear. Players will rarely face the challenge of summer in Abu Dhabi. The maximum temperature here is likely to be 33 to 36 degrees Celsius at the time of the match on Tuesday. The humidity is expected to remain up to 66 percent, which may cause some trouble for the bowlers. At the same time, there is no chance of rain. Let us tell you that Mumbai has played a match at Zayed Stadium and it will have a good idea of ​​the conditions. At the same time, the team of Punjab will play their first match at this ground in the second phase.

MI vs PBKS: if you lose money in dream 11 then join our Telegram channel where we give a winning team of every match