The RPSG bid was about 250% more than BCCIs base price of INR 2000 crore (US$270million approx). The corresponding figure for CVC was over 160%. In all, 22 companies had purchased the tender document but only nine were eventually present at the walk-in bid event held in Dubai that lasted over six hours on Monday.

The bids, enclosed in a sealed envelope, was opened after a lengthy technical evaluation process. The entire process was overseen by the IPL governing council as well as the BCCI top brass led by board president Sourav Ganguly, secretary Jay Shah, treasurer Arun Dhumal, vice-president Rajeev Shukla, and joint-secretary Jayesh George.

In a BCCI media release on Monday Ganguly said it was "heartening" to see two new teams being added to the IPL roster "at such a high valuation, and it reiterates the cricketing and financial strength of our cricket ecosystem". Brijesh Patel, the IPL Governing Council chairman said the IPL was "globalizing" cricket, and its importance as being one of the "most sought-after" leagues in sport was established through the bids from "different parts of the world and from parties with diverse portfolios".

The new franchisees will need to pay out the entire amount over a 10-year period. To ensure that the owners have a solid foundation, the BCCI had put stringent norms in the bid document. A bidder needed to have a turnover of at least INR 3000 crore per year for a minimum of the last three years. Measured in terms of net asset value (assets minus liability) this number was pegged at INR 2500 crore per year over the last three years. In the case of a consortium, the BCCI had put a cap on the number of investors totaling to not more than three. 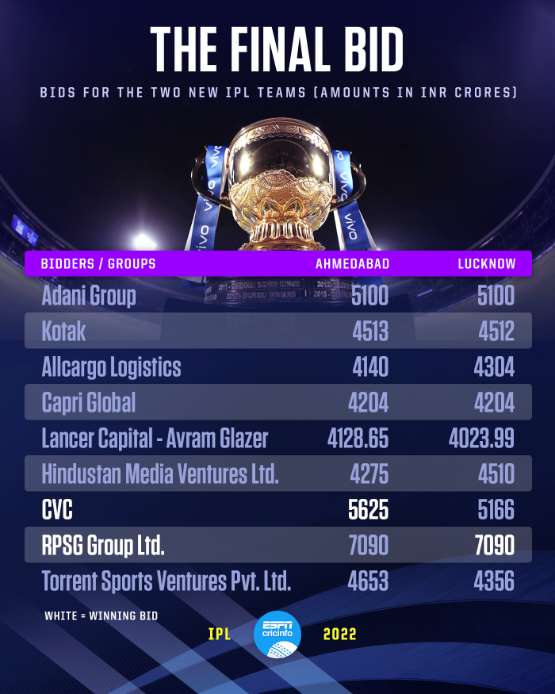 Apart from Ahmedabad and Lucknow, the cities shortlisted by the IPL in the bid document were Cuttack, Dharamsala, Guwahati, and Indore. Bidders were permitted to pick more than one city but would get the rights to own just one franchise.

Along with Lucknow, RPSG also put in bids for Ahmedabad and Indore. While it put the same price (INR 7090 crore) for Lucknow and Ahmedabad, it bid INR 4790 crore for Indore.

CVC picked Ahmedabad and Lucknow and its bid for the latter was INR 5166 crore. Significantly, the minimum bid price raised by all nine bidders was over INR 4000 crore.

It is understood that the BCCI wanted to pick the winner for both cities by using the highest bid and hence RPSG got Lucknow and CVC Ahmedabad. If RPSG were allotted Ahmedabad, then the BCCI would have lost over INR 400 crores on Lucknow. In contrast, in 2008 when the IPL started, the BCCI had allowed the bidders to pick their city of choice.

The winners aside, among the bidders to eventually put their hat in the ring were Lancer Capital, who own Manchester United football club, Ahmedabad-based Indian infrastructure biggie Adani Group, Torrent Pharma, Kotak Group, All Cargo Logistics, Capri Global, and Hindustan Media Ventures Limited.

The Adani Group was the third-highest bidder among the final nine, listing the same bid price - INR 5100 crore - for both Ahmedabad and Lucknow.