LKN vs BLR, IPL 2022 is going to be a big bang on the evening of April 19, in the 31st match of the current seasons league stage, Lucknow Super Giants and Royal Challengers, who are in the top-3, are going to face each other. Both these teams are occupying the second and third positions according to the latest points table. Interestingly, the points of both teams are equal, but the net run rate is the deciding factor.

Now when these two teams collide at the DY Patil Stadium in Navi Mumbai, then there is bound to be an explosion of excitement. Because Lucknow and Bangalore are such teams so far in IPL 2022, which seems to be a very difficult task to defeat. So let us tell you about every important piece of information related to theLKN vs BLR match in this great battle of cricket. 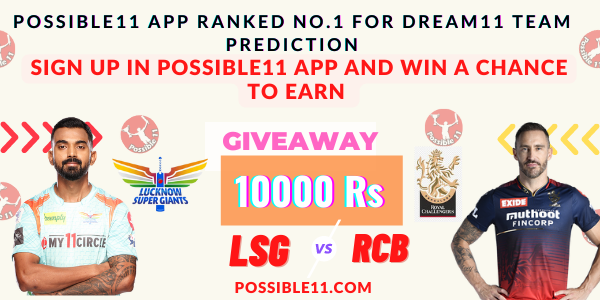 Whichever team wins the Lucknow Super Giants vs Royal Challengers match will have a chance to top the IPL 2022 points table. At present, Gujarat Titans are present at the No. 1 position, but Lucknow and Bangalore are in second and third place with 8-8 points respectively. In such a situation, both the teams have a chance to become the table topper with a better run rate.

Along with this, if we talk about the game plan of Lucknow Super Giants first, then the batting order of this team is the strongest of the tournament. Before the last match, although there was a question about KL Rahuls form, but he has given evidence of returning to the rhythm by scoring a century. Apart from this, Manish Pandey has also been seen contributing well as the number-3 batsman. But in the meantime, the death bowling of the Super Giants is in trouble as Dushmanta Chamira is proving to be very expensive in the end over.

At the same time, the top order of Royal Challengers Bangalore is still not seen performing as expected. Captain Faf du Plessiss bat has become completely silent after the first match. Anuj Rawat has also managed to score just one half-century and Virat Kohli is seen losing wickets after a good start. In such a situation, if RCB has to perform better in front of Lucknow, then it is necessary for any one of these 3 batsmen to walk.

Hasranga and Harshal Patel will have a big responsibility

All eyes will be on Sri Lankan leg-spinner Wanindu Hasaranga while death overs specialist Harshal Patel would also like to make a mark for his performance. On the other hand, Lucknow captain Rahul has scored 235 runs and is in excellent form. He scored a century against Mumbai and is only behind Jos Buttler (272) of Rajasthan Royals in terms of most runs.

De Kock is also in good form while youngsters Ayush Badoni, Deepak Hooda, and Krunal Pandya can play big innings. Jason Holder and Marcus Stoinis give strength to the team. All eyes will also be on fast bowler Avesh Khan and spinner Ravi Bishnoi.

Lucknow Super Giants and Royal Challengers (LSG vs RCB) will be played at DY Patil. The fast bowlers get a good bounce on the red clay pitch of this ground. At the same time, due to the good bounce in the pitch, the ball comes to the bat in a good way. So it can be assumed that this pitch is helpful for both batting and bowling.