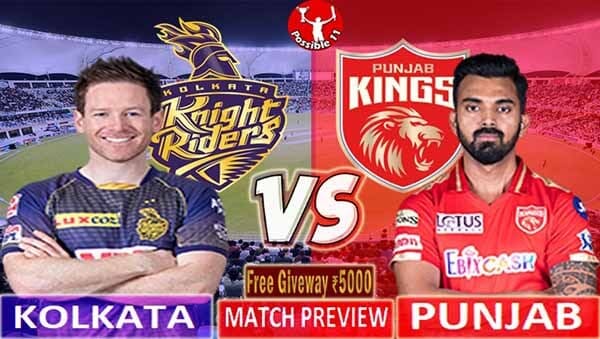 Kolkata is currently at number four in the points table with 10 points after winning five out of 11 matches. At the same time, Punjabs team is at number six with four wins and eight points from 11 matches.

Kolkata Knight Riders (KKR) will face Punjab Kings (PBKS) in the 45th match of IPL 2021 today. The match will be played at the Dubai International Stadium from 7:30 pm. Both Kolkata and Punjab teams will take the field to stay in the race for the playoffs.

Kolkata at number four in the points table

Kolkata is currently at number four in the points table with 10 points after winning five out of 11 matches. At the same time, Punjabs team is at number six with four wins and eight points from 11 matches. In any case, Punjab will have to win all the matches from here. At the same time, the situation in Kolkata is also similar. If he loses, then the position of Mumbai and Punjab will be strengthened.

Kolkata has the upper hand in statistics

Both teams have a new weapon

This time both the teams have a new weapon. KKR have Venkatesh Iyer and Punjab have Ravi Bishnoi. In this match, a match can be seen between Venkateshs aggressive batting and Bishnois spin bowling.

Talking about the Kolkata team, the teams batting in the match against Delhi was not special. Chasing a target of 128 runs, the team lost seven wickets. Apart from Shubman Gill (30 runs) and Nitish Rana (36 runs), none of the batsmen could bat properly. In such a situation, the KKR batsmen may have to face the real challenge in front of the strong bowling of Punjab.

The Kolkata bowlers bowled brilliantly in front of Delhis strong batting line-up and managed to restrict them for 127 runs. Tim Southee, Lockie Ferguson and Sandeep Warrier bowled well. In the next match, the famous Krishna may return in place of Warrior.

At the same time, the responsibility of spin will be on the shoulders of Varun Chakravarthy and Sunil Narine. Venkatesh also took two wickets in the last match.

The biggest problem for the Punjab team is the absence of Chris Gayle in the squad. He has left the bio-bubble of Punjab to prepare for the T20 World Cup. Now Punjab has only Moises Henriques, Adil Rashid, Chris Jordan, and Fabian Allen left as foreign players. It will be interesting to see which one of these captains KL Rahul gives.

Except for Markram, everything else flopped

Apart from Aiden Markram and Deepak Hooda, no batsman could run in the last match against Mumbai. Rahul could score 21 and Mandeep 15. Rahul can make some changes in this match. Mayank Agarwal may return in place of Mandeep. Apart from this, any one of Chris Jordan, Moises Henriques and Fabian Allen can get a chance.

Punjabs bowling against Mumbai was also not special. Apart from Ravi Bishnoi, Arshdeep Singh, and Nathan Ellis, none of the bowlers could do well. Mohammed Shami took a wicket but gave 42 runs in four overs. Rahul will not make any changes in the bowling.

KKR vs PBKS: if you lose money in dream 11 then join our Telegram channel where we provide a winning team of every match