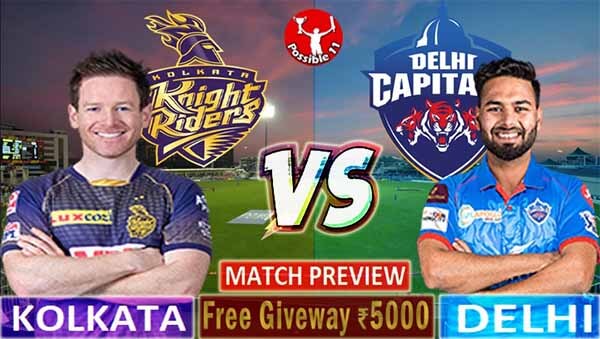 IPL 2021, DC vs KKR: Delhi Capitals will try to qualify for the playoffs by defeating KKR. On the other hand, KKR will try their best to put a stop to the winning chariot of Delhi Capitals.

Even today is the day of doubleheader matches in IPL 2021. The first match is on the small ground of Sharjah, in which the team of Delhi Capitals and Kolkata Knight Riders will be seen fighting for victory. Victory will be at stake for both teams.

Sharjah: In-form Delhi Capitals will look to seal a place in the playoffs by defeating Kolkata Knight Riders in the Indian Premier League match on Tuesday. The good thing for Delhi is that KKRs aggressive all-rounder Andre Russell is uncertain to play in this match due to injury.

Delhi, who are trying to win their maiden IPL title, have played an aggressive game this season and their eyes are not only on making the playoffs but also on doing better than last year. He was defeated by Mumbai Indians in the final last season.

Delhi is second on 16 points with eight wins from ten matches, while KKR is at the fourth position with six losses and four wins. Delhi defeated Rajasthan Royals in the previous match while KKR suffered a defeat at the hands of Chennai Super Kings.

Russell walked off the field after bowling three overs due to a hamstring injury, which KKR missed. In his absence, the famous Krishna was given the responsibility of bowling the 19th over but he could not stop Ravindra Jadeja.

The mistake will be heavy in this match

Eoin Morgan and his team know very well that they can do no wrong against a team running in a form like Delhi. This match will be very important for them to make it to the playoffs. They will have to do well in every department against a strong team like Delhi led by Rishabh Pant.

Morgan, Dinesh Karthik, Nitish Rana, Venkatesh Iyer, and Shubman Gill will all have to score runs together. Rahul Tripathi, who scored 45 against Chennai, would like to maintain that form. Delhi, on the other hand, has a strong position that played well against the Royals.

Delhis team is trying its best this time for its first title. The bowlers of the team are bowling well for him and are completely dominating the opponents. Talking about the past performance of both the teams, Delhi Capitals had registered a great win against Rajasthan Royals while Kolkata had to face defeat on the last ball in the match against Chennai.

If Kolkata wants to maintain its playoff hopes, then it will have to win the match against Delhi at any cost. There will be no room for any kind of mistake for the team in this match. KKR will have to give their best in every field to beat Delhi.

KKR vs DC: if you lose money in dream 11 then join our Telegram channel where we give a winning team of every match