Compared to the first two T20Is, the third game of the series was an absolute humdinger. On a slow and slow strip at the Old Trafford in Manchester, England and Pakistan fought hard. In the end, the Three Lions won by three wickets with two balls remaining and they also secured a series victory.

Yet another time, Babar Azam and Mohammad Rizwan took their team off to a steady start, thanks to a 42-run stand. Adil Rashid separated them, removing Babar for 11. Sohaib Maqsood and Fakhar Zaman promised with two boundaries each, but none could carry on and garner a massive score.

Rizwan, at the other end, looked determined and notched his half-century without much fuss. He went on to stay unbeaten on 76 off 57 with five fours and three sixes. His knock guided the visitors to 154 for six. For the Brits, Rashid picked up four wickets. Moeen Ali got the wicket of Zaman.

On a difficult track to bat on, the hosts started in a brisk manner. Jason Roy and Jos Buttler stitched together a 67-run partnership for the opening wicket off 48 balls. Buttler strained a bit as his 21 came at under a run-a-ball. Dawid Malan scored 31, but couldn’t go beyond a strike rate of 100. 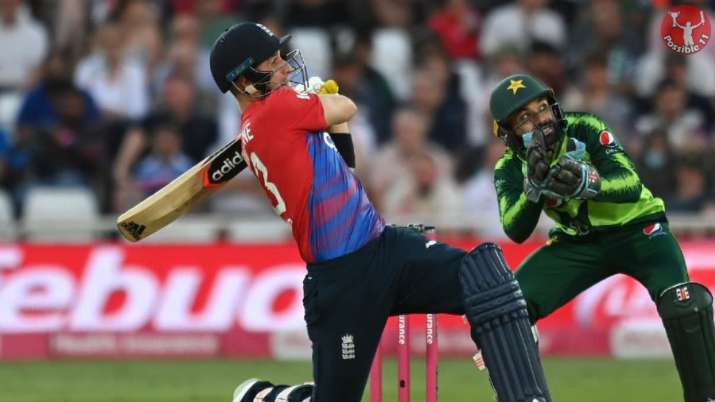 However, Roy carried on and notched a 36-ball 64 with 12 fours and one six before Usman Qadir dismissed him in the 11th over. Eoin Morgan’s 12-ball 21 cameo helped the home team over the line. For Pakistan, Mohammad Hafeez picked up four wickets, but his valiant efforts went in vain.

We were 10-15 runs short: Babar AzamAfter the game, Morgan, the England skipper, admitted that the track was a tough one to bat on. He also lauded the batters for staying calm under pressure. Babar, on the other hand, admitted that Pakistan could have gotten 10-15 more runs under their belt.

“It means a huge amount. The way we play, this is the worst possible condition for us. But we have been pushing our boundaries. But even I think the ball won’t turn anywhere near as much as it did today even in the UAE as I played in the IPL last season.

“We were 10-15 runs short. We wanted to fight and we did. Unfortunately, we couldn’t win. We could have scored few runs more at the top of the order. There will be good days and bad days. We will sit down and have a chat about it.