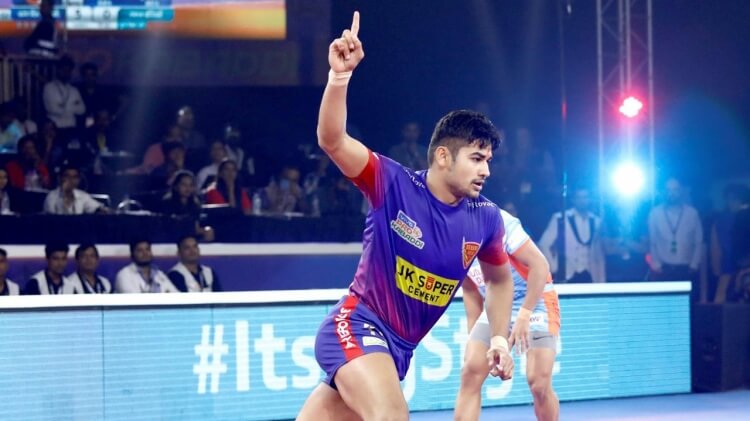 The second game on Monday evening will be between in-form Dabang Delhi and a struggling Jaipur Pink Panthers outfit.

The Pink Panthers are currently placed eighth in the Pro Kabaddi standings with 18 points to their name. They have three wins and four losses from seven games so far in the ongoing edition of the Pro Kabaddi league.

Meanwhile, Dabang Delhi KC are sitting at the top of the PKL points table with 31 points from seven matches. They have registered five wins and a couple of draws this season. The Delhi-based club is the only team not to have lost a single game thus far in the eighth edition of the Pro Kabaddi League.

Both sides walk into this encounter, having won their previous PKL fixtures against their respective opponents. The Pink Panthers defeated the Puneri Paltan, while Dabang Delhi defeated UP Yoddha. The two sides will look to extend their winning lead in the competition.

Deepak Niwas Hooda: Deepak Niwas Hooda is the star player for the Jaipur Pink Panthers. The allrounder adds tremendous value to both departments. He hasnt had the best of seasons thus far as he has managed just 40 raid points and has failed to register even a single successful tackle. He will be eager to prove a point tonight.

Sahul Kumar: Sahul Kumar has made a thunderous entry into this Jaipur Pink Panthers side. The right corner defender has been the top defender for the side and has claimed 16 tackle points in just 6 games and will have a big role to thwart the threat of Delhis sharp-looking raiding unit.

Arjun Deshwal: Arjun Deshwal formed a key part of the U Mumba raiding department last season, which had no superstars and he is making the most of that experience this season. Deshwal has shown immense potential this season and has registered double-digit scores in all games thus far, securing 92 raid points thus far. He has now 4th on the list of top-scoring raiders and has been the leader for Jaipur.

Naveen Kumar: Naveen Kumar is a phenomenal young raider and has been doing the job for Delhi for a long time. The young sensation was the 3rd highest scoring player last season and has carried that form here. He is top on the list this season with 123 raid points to his name. He has now broken the record for maximum points in the first 50 games and is looking unstoppable. He scored 17 raid points in the last games and will be the dangerman for Jaipur.

Joginder Narwal: Joginder Narwal holds the Dabang Delhi defense together and is a stellar performer. He is their top-performing defender this season with 11 tackles to his name. He will make it hard for the Jaipur raiding unit.

Manjeet Chhillar: Manjeet Chhillar is one of the most experienced players on this Delhi side. The all-rounder has majorly taken up defensive duties this season and has scored 12 tackle points, including 4 in the last game. He has picked up some fine recent form and will play a pivotal role.