Its 60-40 in New Zealands favour against India :Brendon McCullum 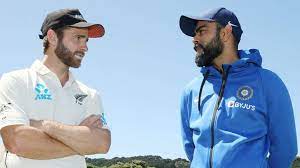 Former New Zealand captain Brendon McCullum said he expects the World Test Championship final between India and New Zealand to be a closely fought affair. The two teams meet in the final of the inaugural edition of the competition at the Rose Bowl in Southampton on June 18.

Indian players are currently in quarantine in Mumbai. The players and the support staff will arrive in England on June 3 following and will be in managed isolation, meaning they will be allowed to train gradually after the necessary negative RT-PCR tests in Southampton.

Notably, Indian players were in hard quarantine and were gradually allowed to work on their fitness while being indoors in Mumbai.

On the other hand, Kane Williamsons men have had their outdoor training sessions after quarantine in England. New Zealand will face England in a 2-Test series, starting June 2 before the WTC final.

"Just as New Zealand respects India, as a fan, I will respect India, knowing how good they are and the fighting spirit they have. I think we are in for a ripping World Test Championship final. May the best team win and the best game," he added.

India are likely to be allowed to play an intra-squad practice game before the World Test Championship final. The World No 1 Test side will travel with a 20-man squad and as many as 4 reserve players to England where they will play 5 Tests against the hosts in August-September apart from the WTC final.

PSL matches will be held in Abu Dhabi, PCB gets permission