IPL : Fifth foreigner to win Player of the Match in Du Plessis final 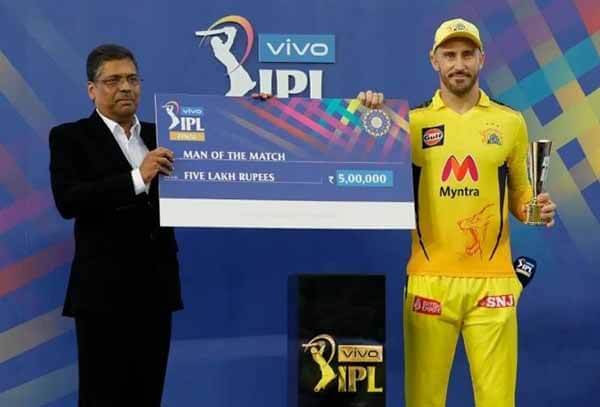 The final match of the Indian Premier League 2021 was played between Chennai Super Kings and Kolkata Knight Riders on 15 October. In this title match held in Dubai, CSK defeated KKR by 27 runs to win the title for the fourth time. Faf du Plessis played an important role in winning the match for Chennai. In this title match, he played a brilliant inning of 86 runs in 59 balls while batting. During his innings, he hit seven fours and three sixes. Faf was awarded the player of the match title for his excellent innings. Looking at the history of IPL, Du Plessis is the fifth foreign player to win the Player of the Match award in the final match. Let us tell you about the five foreign players who got the Player of the Match award in the final of the IPL. Apart from this, Rituraj also tells about Gaekwad and Ambati Rayudu who equaled the record of Robin Uthappa and Kieron Pollard.

Overseas Players Who Won Player Of The Match In IPL Final

Rituraj Gaikwad of Chennai Super Kings is the second player in IPL history to get the Orange Cap and his team was successful in winning the title. Gaikwad scored the highest 635 runs in IPL 2021. In this case, he equaled Robin Uthappas record. Uthappa scored the most runs while playing for KKR in the 2014 IPL and got the Orange Cap. Apart from this, KKR also won the title.