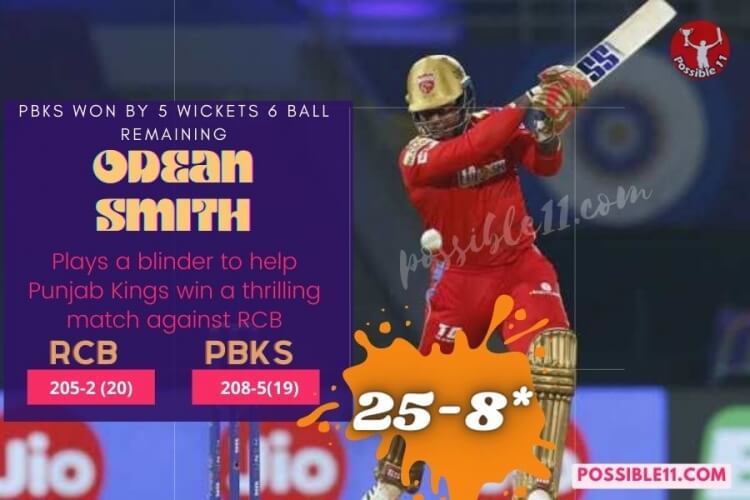 It was a solid batting display by both teams with Punjab Kings (PBKS) eventually beating Royal Challengers Bangalore (RCB) by five wickets in their first match of the season. Chasing 206, the team kicked off on a good note with Mayank Agarwal and Shikhar Dhawan adding 71 runs in just 7.1 overs. Wanindu Hasaranga then broke the stand, dismissing Mayank on 32(24) balls in his first ball of the season. Dhawan and Bhanuka Rajapaksa continued Punjabs fight and added 47 runs for the second wicket before Harshal Patel provided RCB with their second breakthrough, removing the Indian on 43(29).

After being put on to bat first, Du Plessis and Anuj Rawat gave RCB a solid start, adding 50 runs for the first wicket before the latter was dismissed in the 7th over. RCB continued to pile on the runs as the captain and Kohli added 118 runs for the second wicket. However, Du Plessis missed out on his century, before Dinesh Karthik added much-needed fireworks to RCBs innings. For Punjab Kings, Rahul Chahar and Arshdeep Singh took a wicket apiece. Initially, PBKS won the toss and have opted to field. Both franchises will be with new captains and will be aiming for a win in this fixture.

Earlier, RCB posted 205 for 2 after being asked to bat. Captain Faf du Plessis top-scored with a 57-ball 88, while Virat Kohli made 41 not out as the duo shared 118 runs for the second wicket. Dinesh Karthik chipped in with a quickfire 32 not out off 14 balls. For Punjab Kings, Rahul Chahar and Arshdeep Singh took a wicket apiece.