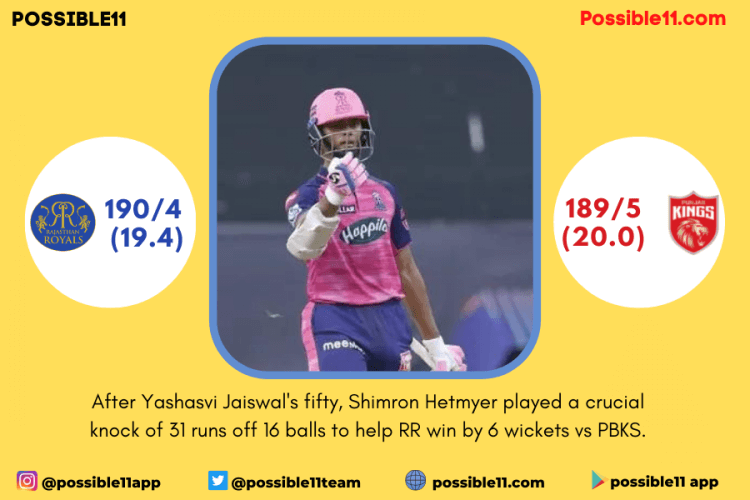 IPL 2022, PBKS vs RR, Highlights​: After Yashasvi Jaiswals fifty, Shimron Hetmyer played a crucial knock of 31 runs off 16 balls to help RR win by 6 wickets vs PBKS. Jos Buttler and skipper Sanju Samson departed early but Yashasvi Jaiswal batted superbly and scored a fine half-century but was dismissed for 68 runs soon after. Jos Buttler finally departed to Kagiso Rabada after taking the bowler to the cleaners, hitting the latter for six and three fours in the same over while skipper Sanju Samson also departed for 23 runs off 11 balls soon after.

Batting second, Yashasvi Jaiswal and Jos Buttler gave Rajasthan Royals a strong start in their bid to chase down the 190-run target set by Punjab Kings. Jonny Bairstow hit a fine half-century while Jitesh Sharma scored 38 runs in 18 balls towards the end of the innings to help Punjab Kings post 189/5 in 20 overs vs Rajasthan Royals.

Rajasthan Royals comfortably beat Punjab Kings by six wickets in their IPL match. Batting first, Jonny Bairstow was back among runs with a fine half-century as Punjab Kings put up a challenging 189 for 5. Bairstow scored 56 off 40 balls with eight fours and a six. Jitesh Sharma (38 not out off 18 balls) and Liam Livingstone (22 off 14 balls) also played nice little cameos at the back-end to spruce up the total.

For the Royals, Yuzvendra Chahal was the pick of the bowlers with figures of 3 for 28 in 4 overs. In reply, the Royals scored the required runs in 19.4 overs with Yashasvi Jaiswal making 68 off 41 balls. Arshdeep Singh was the best bowler with 2/29 in 4 overs.