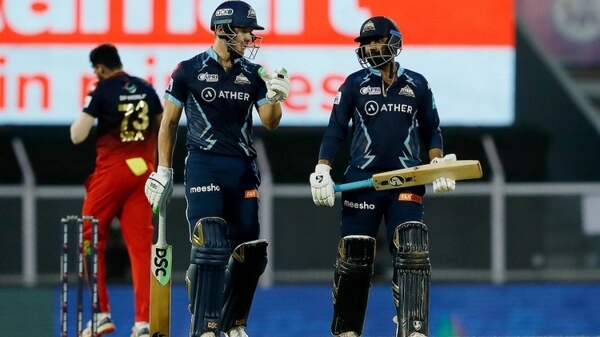 Gujarat Titans Rahul Tewatia and David Miller closed out any chance that Royal Challengers Bangalore may have seen when they took a clutch of wickets in the middle overs as they chased down a target of 171 with three balls to spare. Tewatia and Miller put up an unbeaten stand of 79 run off 40 balls for the fifth wicket, thus helping GT to a six-wicket win. Openers Wriddhiman Saha and Shubman Gill put up a stand of over 50 runs for the second consecutive time but RCB with Wanindu Hasaranga and Shahbaz Ahmed combined to take four wickets. Earlier, Virat Kohli finally scored his first half-century of the season, putting up 58 off 53 balls. He put a second-wicket stand of 99 runs with Rajat Patidar, who himself scored 52 off 32 balls.

Gujarat Titans has done it again! Rahul Tewatia and David Miller have pulled off yet another heist for Gujarat to make it 8 wins out of 9 nine and no team in the history of the competition has had more points after nine matches than Gujarat.

Tewatia finishes it off with a four. What a partnership this has been between these two ace finishers. Yes, it has been aided by some horrendous fielding errors by RCB but makes no mistake, Miller and Tewatia have not just swung the bat at everything blindly. The partnership between them ends at 79 off 40 balls and it has been put together with care. Miller is unbeaten on 39 off 24, Tewatia on 43 off 25.

Bangalore were definitely a few runs short at the halfway stage and it has cost them dearly in the end. They also failed to pick up wickets in the Powerplay which allowed the opposition to get off to a good start. The wickets did come in the middle overs and Shahbaz Ahmed bowled exceptionally well. Wanindu Hasaranga too picked up a couple of important wickets. At the death though, the experienced trio of Mohammed Siraj, Harshal Patel and Josh Hazlewood just couldnt stem the flow of boundaries and Bangalore succumbed to a third defeat in a row.

Hardik Pandya was also looking to bat first because of the heat. Gujarat Titans have made two changes: Pradeep Sangwan comes in for Yash Dayal and Sai Sudharshan comes in for Abhinav Manohar.

RCB has won the toss and has elected to bowl first. Faf du Plessis spoke about breaking the trend at the toss. The RCB skipper also said that there is one change in the team. Mahipal Lomror comes in for Suyash Prabhudessai.