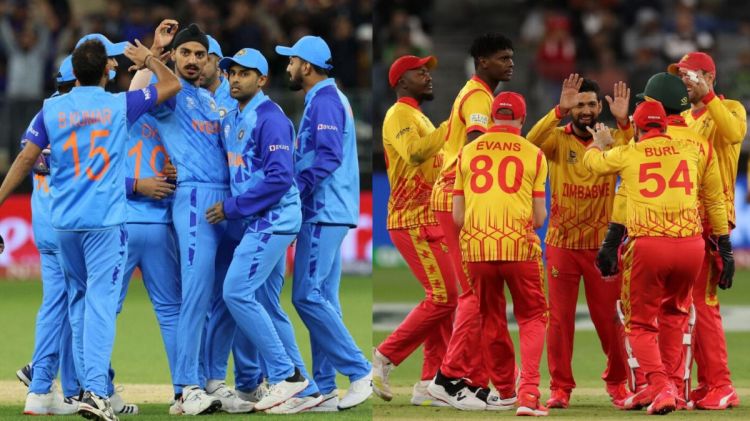 India vs Zimbabwe Head to Head, Weather Report, Dream 11 fantasy tips, India will play T20 against Zimbabwe after six years, India has lost twice, know the record.
The Indian team is at the top of the points table with three wins from four matches. He is looking for a win to reach the semi-finals. Even if Team Indias match is canceled due to rain, then it will go ahead with seven points.

India vs Zimbabwe: The 30th match of the T20 World Cup Super-12 between India and Zimbabwe will be played on 6th November at 01:30 PM Indian time at Melbourne Cricket Ground (MCG), Melbourne, Australia Ground Indian team defeated Bangladesh team in the last match. They have secured their place in the semi-finals by defeating them by 5 runs. For the Indian team, Virat Kohli and Arshdeep Singh have been in very good form in this tournament so far.

On the other hand, Zimbabwe team had to face defeat by 5 wickets against Netherlands in the last match. Blessing Mujarbani, Sean Williams, Sikandar Raza have performed very well in this tournament for Zimbabwe team. The Zimbabwe team has the ability to give a good fight to the Indian team in this match as well, both the teams will go into the field with the intention of registering a victory by performing brilliantly in this match.

India vs Zimbabwe Head to Head

IND vs ZIM Head to Head: India and Zimbabwe will face each other in T20 format after six years. The last match between the two was played on 22 June 2016 in Harare. Then the Indian team won the thrilling match by three runs.

Talking about the total T20 matches between India and Zimbabwe, both the teams have played against each other seven times. In these, India has won five and Zimbabwe has won twice. Incidentally, all the matches have been played in Harare, the capital of Zimbabwe. In such a situation, for the first time both the teams will face each other on another ground.

Table of results of matches between India and Zimbabwe

Talking about the weather in the match between Zimbabwe and India (ZIM vs IND) to be played in Melbourne, the weather is going to be cold during the match. There is every possibility that the cover of clouds will be seen in the sky. On the other hand, along with cool air, pleasant weather can also be seen in the field. If the rain does not disturb the match, then the match will start at 1:30 Indian time.

Melbourne will have a minimum temperature of 13 °C and a maximum temperature of 24 °C on the day of the match. While the humidity will be 51 percent. At the same time, strong wind will blow at a speed of 11 kilometers per hour. Whereas according to Weather.com, there is a possibility of 20 percent rain. However, rain can interfere in the big match between Zimbabwe and India. 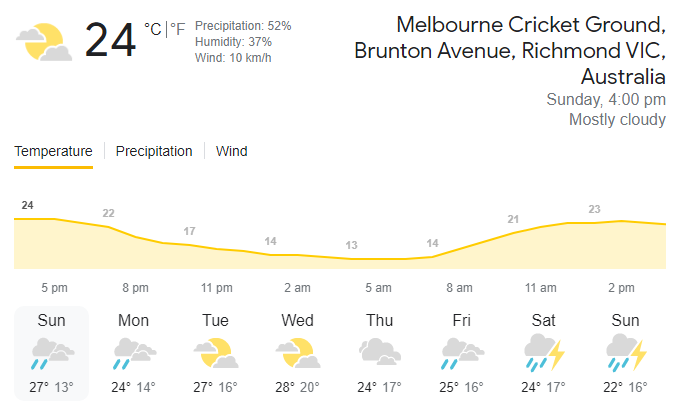 Virat Kohli is the highest run-scorer in this tournament from the Indian team, has so far scored 220 runs in 4 matches, it seems to be in a very good rhythm, has scored half-centuries in 3 out of 4 innings in this match. He can prove to be a good option as a captain in the dream team.

Hardik Pandya He is the leading all-rounder of the Indian team, becoming the first all-rounder to take 1000 runs and more than 50 wickets for the Indian team in T20 format. So far in this tournament he has scored 47 runs and has taken 6 wickets, in this match also he can perform well with both bat and ball.

Arshdeep Singh This young fast bowler of the Indian team has so far taken 9 wickets in 4 matches, in this match also he can get good points in the dream team.

Sikandar Raza This year is the best performing all-rounder from Zimbabwe team, so far in this tournament he has taken 9 wickets in 7 matches and scored 185 runs in this match also he can perform well with both bat and ball.

Sean Williams Zimbabwe is the second highest run-scorer for the team, he has scored 144 runs in 7 matches and has taken 3 wickets, in this match will also be a good option from the batting category.

Blessing Mujarbani He is the leading fast bowler of the Zimbabwe team, so far he has taken the most wickets in this tournament, he has taken a total of 11 wickets in 7 matches, he can also perform well in this match. 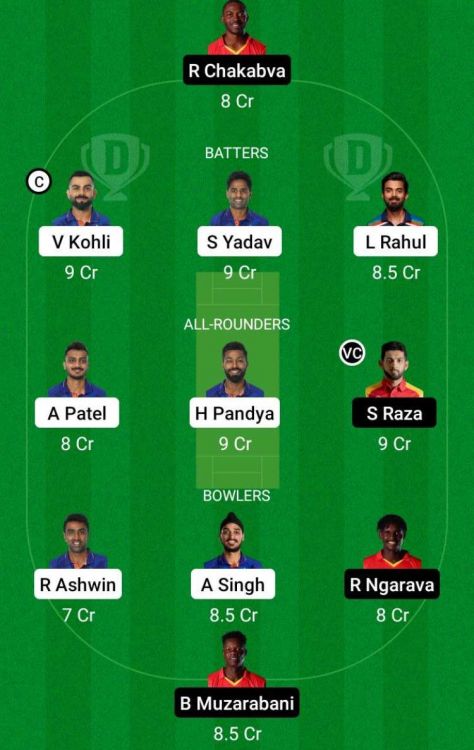 If we look at the last few matches, this pitch helps the fast bowlers a lot, the average score has been between 142-159 runs on this ground. Hardik Pandya, Sikandar Raza as captain and vice-captain in the grand team in this match. Can prove to be a good option.

India vs Zimbabwe Who will Win

IND vs ZIM: The chances of Indian team winning the match are high. They seem to be a much stronger team in this match.