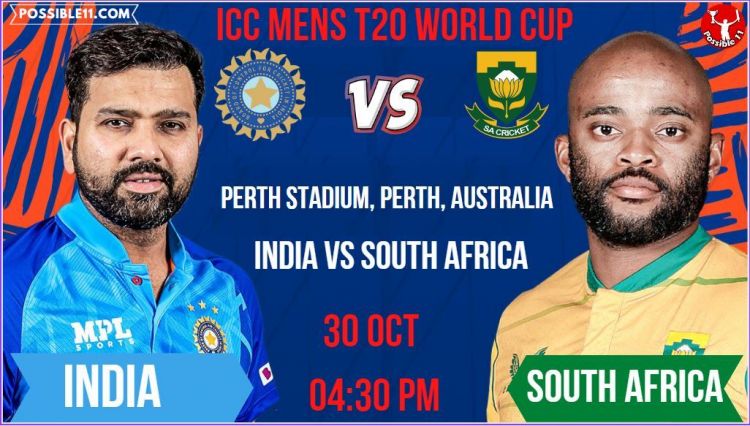 India vs South Africa Dream11 Prediction: The Indian team defeated Netherlands team by 56 runs in the last match to register their second successive win in the tournament and are at the top of the points table with 4 points. Virat Kohli and Arshdeep Singh are looking in very good rhythm from the Indian team, in this match also the team is expecting a good performance from them. On the other hand, South Africa team defeated Bangladesh team by a huge margin of 104 runs in the last match and registered their first win of the tournament and are second in the points table.

Riley Rossouw, Tabrez Shamsi, Enrique Nortje have performed very well in the last match for South Africa team. Even against a strong team like India, the South Africa team expects good performance from all its players. Both the teams will try to maintain their winning streak in the tournament by winning this match while performing brilliantly in this match.

India vs South Africa: The weather will be clean with slight cloud. But there is no chances of rain, We can expect a good match between the two sides.
Weather in Perth, AU is clean. The temperature is expected to around 17°C on the match day with 45% humidity and 14.1 km/h wind speed. There are 0% chances of precipitation during the game. 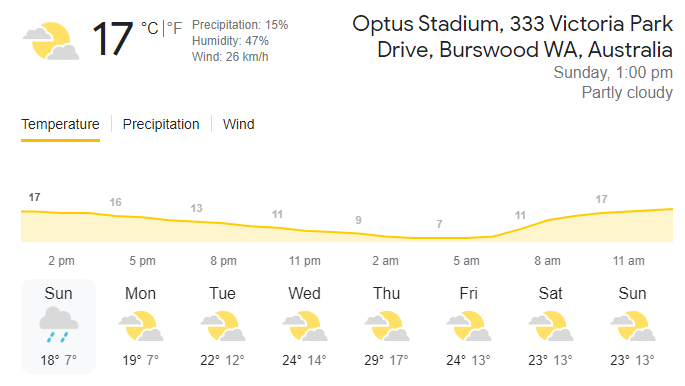 Virat Kohli Virat Kohli demonstrated tremendous batting in exceptional conditions against Pakistan and led the team to victory in the last match also, he scored a half-century so far, has scored 144 runs in 2 matches, in this match it is a good option as a captain in the dream team. can be proved.

Hardik Pandya He is the leading all-rounder of the Indian team, he took 3 wickets while performing all-round against Pakistan and scored 37 runs, becoming the first all-rounder to take 1000 runs and more than 50 wickets for the Indian team in T20 format. In this match too, he can perform well with both bat and ball.

Quinton de Kock South African teams experienced wicket-keeper batsman Quinton de Kock has so far scored 110 runs in 2 matches while batting brilliantly, in this match also the wicketkeeper category is right, will be a good option in the dream team.

Riley Rossouw In the last match, he played a brilliant innings of 109 runs while batting brilliantly, in this match too he will remain the leading batsman for the South Africa team.

Enrique Nortje He has taken a total of 5 wickets in 2 matches played by the South African team so far in this tournament, it is the leading fast bowler of the South Africa team in T20 format. Can do well in this match as well.

Tabrez Shamsi So far, he has got the opportunity to bowl in only one match in this tournament, in which he has performed brilliantly and has taken 3 wickets. Is.

Arshdeep Singh This young fast bowler of the Indian team has so far taken a total of 5 wickets in 2 matches, in this match also he can get good marks in the dream team.

Rohit Sharma Indian team captain Rohit Sharma is the highest run-scorer in the T20 format. He has the ability to win matches on his own. In the last match, he scored 53 runs, in this match, the Indian team is expecting a good start from him.

Suryakumar Yadav He is the rising star of the Indian cricket world. In the last match, he played an important innings of 51 runs, he can score big in this match. 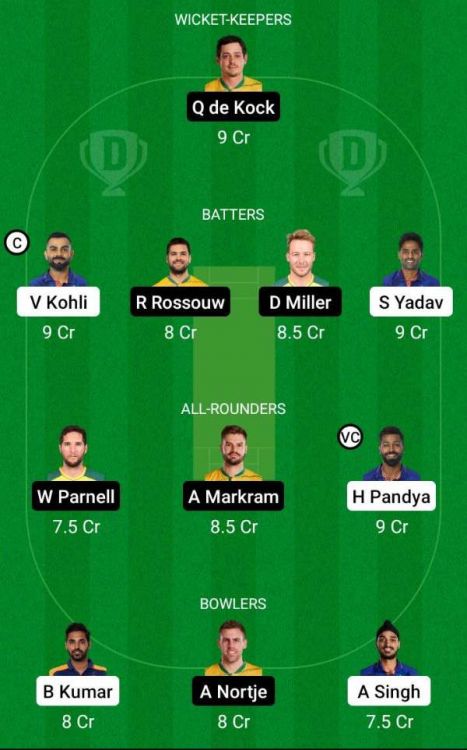 If we look at the last few matches, the fast bowlers get a lot of help on this pitch, the average score has been between 142-159 runs on this ground. Suryakumar Yadav, Quinton de Kock can prove to be a good option in this match as captain and vice-captain in the grand team.