India vs Pakistan (IND vs PAK) Match Preview, Head to Head, Weather Report, Team India will come down from Pakistan to settle the account of the last T20 World Cup.

IND vs PAK Match Preview: After breaking the record of never losing against Pakistan in the ICC World Cup last time, the Indian cricket team will go into their first Super 12 stage match of the T20 World Cup on Sunday with the intention of giving the gift of Diwali to the country by defeating arch-rivals. There is a possibility of rain falling on this match, but according to the weather experts here, the possibility of cancellation of the entire match is less.

Thousands of cricket lovers from both the countries have gathered to watch this match. All tickets for the stadium are sold out. It is a common match for the teams of Rohit Sharma and Babar Azam, but for millions of cricket lovers of both the countries, it is Bas This match. Under the leadership of Mahendra Singh Dhoni, the Indian team has never lost to Pakistan in ICC tournaments and Dhoni has been saying time and again that there is no word like revenge on the cricket field. But a lot has changed in the last one year. On the basis of the dangerous bowling of Shaheen Shah Afridi, Pakistan defeated India for the first time in a World Cup match.

IND vs PAK Dream11 Top Pics:
Shaheen Afridi is the biggest threat to Team IndiaAfridi took three wickets for 31 runs and not only gave victory to Pakistan, but also neutralized the great batsmen of modern cricket. Rohit, Virat Kohli and KL Rahul will not forget the defeat in Dubai last year. The BCCIs statement on him not going to Pakistan to play the Asia Cup and the Pakistan Cricket Boards threat to withdraw from the ODI World Cup to be held in India next year has added fuel to the fire.

Rishabh Pant may have to sit on the bench
The cause of concern for the Indian team is the team combination. India has not been able to get a stable team combination for some time now. India may have to drop specialist wicketkeeper Rishabh Pant to field an additional bowler. Apart from Afridi, the batting order also has to face Naseem Shah and Haris Rauf. How Indias top three batsmen play Afridi in the powerplay will decide the condition and direction of the match.

A lot will depend on Suryakumar Yadavs performance
In such a situation, a lot will depend on Suryakumar Yadav, Indias number one batsman in the T20 format, who is famous for showing his natural game in every situation. If it rains, Rohit will like to bowl after winning the toss. India has three specialist spinners but the decision on fielding them will be taken according to the weather. Harshal Patel can get a chance when it rains, who is also an expert in batting.

India-Pakistan teams clashed 37 years ago in Melbourne
Pakistan has three brilliant batsmen Shan Masood, Mohammad Nawaz and Khushdil Shah, so the possibility of Ravichandran Ashwin playing cannot be ruled out. In this match of equalization, Pakistans edge seems a bit heavy, so the only reason for that is Shaheen Shah Afridi. After 37 years, India and Pakistan are facing each other at the MCG.

India vs Pakistan (IND vs PAK) Head to Head

IND vs PAK Head to Head: In the T20 World Cup 2022, there is a clash between India and Pakistan (IND vs PAK) on 23 October. Before this match, there have been 11 matches between the two teams. Among them, India has the upper hand. India has won 7 out of these 11 matches, while three matches are in the hands of Pakistan. A match has also been tied.

Most Runs: Virat Kohli holds the record for scoring the most runs in Indo-Pak T20 matches. He has played 9 matches and scored 406 runs.

High Score: The record of making the highest score in an innings in Indo-Pak T20 matches is recorded in the name of Mohammad Rizwan of Pakistan. He scored 79 runs in 55 balls in the last World Cup.

Highest Batting Average: This record is also in the name of Mohammad Rizwan. Rizwan has scored against India at an average of 96.50.

Most sixes: This record is recorded in the name of former Indian cricketer Yuvraj Singh. Yuvraj has hit 9 sixes in Indo-Pak matches.

Most wickets: Former Pakistan fast bowler Umar Gul is on top here. He has taken 11 wickets.

Best bowling in a match: Mohammad Asif has taken 4 wickets for 18 runs in 4 overs in the first T20 match of India-Pakistan on 14 September 2007. This is the best bowling performance of the matches between the two teams so far.

Best economy: Pakistans fast bowler Mohammad Amir bowled the most tight in Indo-Pak matches. He did 7 overs in 2 matches and took 4 wickets for just 29 runs. That is, his economy rate was 4.14.

Most matches: Rohit Sharma holds the record for playing the most number of Indo-Pak T20 matches. He has played 10 out of 11 matches.

Highest Score: On 28 December 2012, the Indian team scored 192 runs in the T20 match against Pakistan for the loss of 5 wickets. This remains the highest score ever.

Minimum score: On February 27, 2016, the entire team of Pakistan was all out for just 83 runs against India. This remains the lowest score so far in the matches between the two teams.

IND vs PAK Weather Report: According to Weather.com, there is little chance of rain during the day on Sunday. During this time it will be cloudy. However, after dusk, a change in the weather can be seen. Even though in India you will be able to watch this match from 1:30 pm, but at that time it will be 7 pm in Melbourne. There is a maximum 24 percent chance of rain in the night. 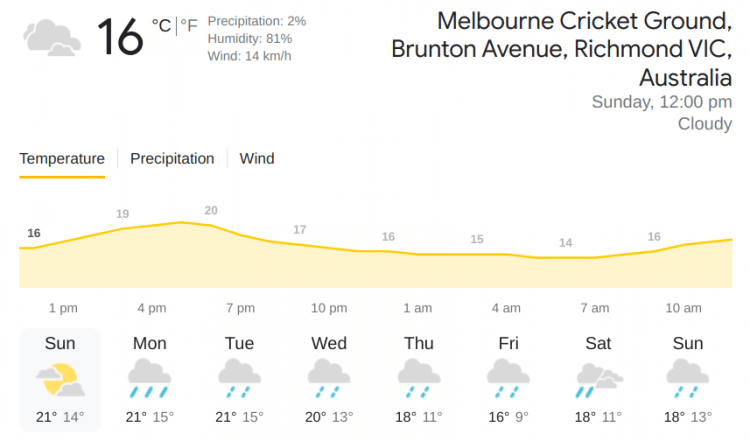 Where to Watch Ind vs Pak match

How to Watch Ind vs Pak Match: You can watch India vs Pakistan match on Starsports network and you can also watch it on mobile on Hotstar app.

How to watch IND vs PAK match for free