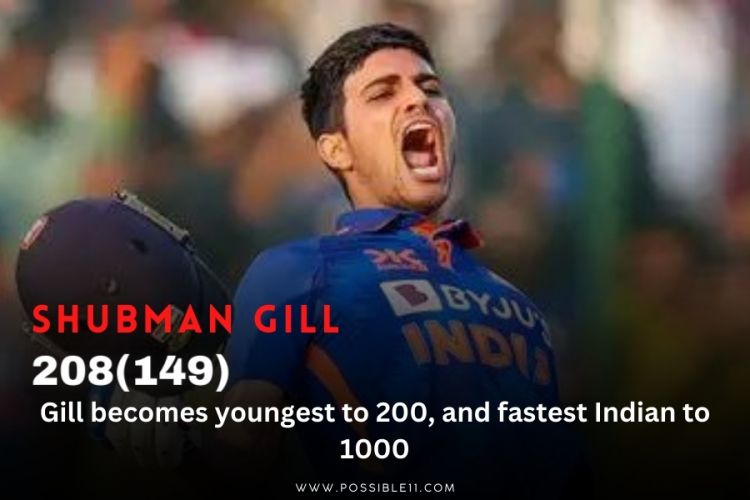 The Indian cricket team secured a 12-run victory over New Zealand in the first ODI at the Rajiv Gandhi International Cricket Stadium in Hyderabad. After India opted to bat first, Shubman Gill scored an impressive 208 runs, including a double century, to lead the team to a total of 349/8. Despite a strong partnership from New Zealand's Michael Bracewell and Mitchell Santner, who scored 140 and 57 runs respectively, the visitors were unable to catch up to India's total. Mohammed Siraj, Kuldeep Yadav, and Shardul Thakur each took two wickets, with Thakur dismissing Bracewell in the final over to secure the win for India, giving them a 1-0 lead in the three-match series.

Fantastic finish to an electrifying match! The tension was palpable as Thakur bowled the last over with New Zealand needing just 18 runs to win. But, Thakur rose to the occasion and delivered a crucial blow by dismissing Bracewell, who had played a brilliant knock of 140. With this wicket, India sealed a 12-run victory and took a 1-0 lead in the series. A memorable debut for Gill, who smashed a stunning 208 and Siraj, who took 4 wickets in the match. The series opener at the Rajiv Gandhi International Stadium in Hyderabad was a true thriller and will be remembered for a long time.

The bowler delivers, the batsman commits, and the umpire raises the finger! India has dodged a bullet as Shardul Thakur strikes gold with a stunning LBW dismissal. Michael Bracewell's valiant 140-yard run off 78 yards was in vain. India takes the lead in the series, #INDvsNZ pic.twitter.com/v2fbt0sDep

It was an amazing inning (from Bracewell). From 131/6, to come and play innings like that, for him to put our team in a situation to win the game, it's outstanding. Obviously disappointing that we couldn't get across the line but it was special. When you're chasing and coming in a pressure situation, to give us a chance to win that game was special. I think it probably gripped a bit more under lights, India used a lot more cutters into the wicket and it worked. Bracewell batted well and his partnership with Santner was very good to see. Losing captain Tom Latham

We were just trying to give ourselves a chance (by building a partnership after six wickets). Unfortunately, we fell short right at the end. Once Mitchell (Santner) and I managed to settle, we started believing. We weren't trying to win it then, just wanted to take it deeply to give us a chance. We left too much to do at the end. You back yourself to get 20 runs in the last over, unfortunately, it wasn't my day today. They bowled really well in that phase, stuck to their plans, and nailed their yorkers (on losing a bit of tempo after reaching in a hundred). It was difficult to get them away at that stage. Unfortunately, we couldn't get over the line today. Michael Bracewell