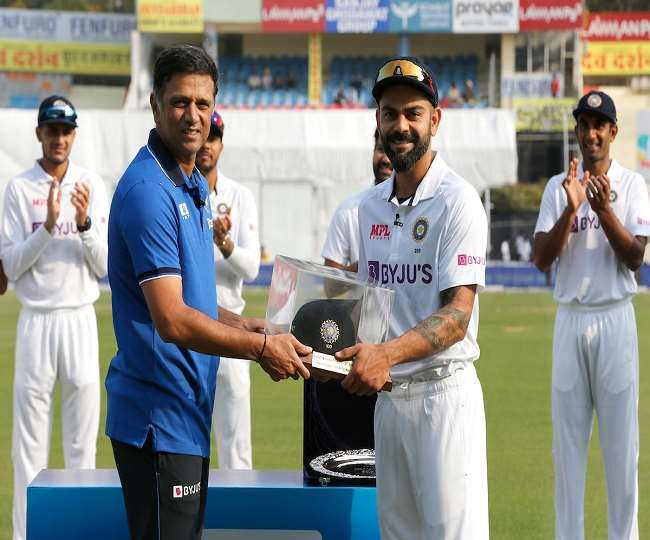 Virat Kohli was honored before the 100th Test, his wife and brother were present on this occasion. Dravid said on this occasion that he has earned this achievement and he hopes that he will continue to show such a game in the coming times.

Virat Kohli has become the 12th player in India and 71 in world cricket to play 100 Tests. On this occasion, Team India head coach Rahul Dravid honored Virat with a special cap. His wife and Bollywood actress Anushka Sharma was also present on this special occasion. Dravid said that he has earned it and he deserves it and hopes to see more such things in the coming years.

Speaking on the occasion, Kohli said that generations to come will remember him for achieving this position in the purest form of cricket. Kohli has achieved this landmark as soon as he landed in the Mohali Test between India and Sri Lanka.

Expressing his happiness, Kohli said, “This is a special occasion for me, for my wife and for my brother. Everyone is proud. Its a team game and it wouldnt have been possible without you. Thanks to BCCI. Currently, the amount of cricket played in all three formats and in IPL. The next generation will know that we played 100 Test matches in the purest form of cricket.

Kohli will have a chance to end his century drought in this match. If he can do this in this match, then he will become the first Indian to do so in the 100th Test for India. Virats last international century with the bat came against Bangladesh in 2019.

Kohli would like to make this match memorable with a century. Kohli said about his journey that he did not think that he would be able to achieve this feat. Let us tell you that Kohli had captained India for the last time in the Test against South Africa.

What a moment to commemorate his 100th Test appearance in whites ??

Words of appreciation from the Head Coach Rahul Dravid and words of gratitude from @imVkohli??#VK100 | #INDvSL | @Paytm pic.twitter.com/zfX0ZIirdz