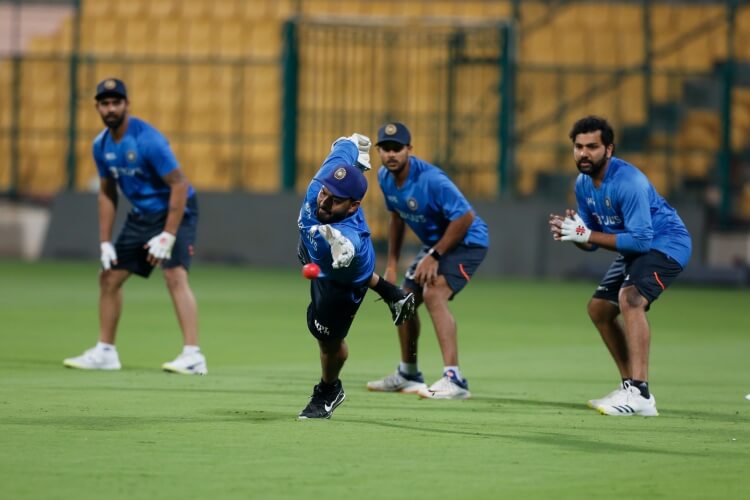 Rohit will be playing his 400th international during this pink ball test.

The 2nd Test match between India and Sri Lanka will be played from the 12th of March at the M.Chinnaswamy Stadium, Bengaluru.

After beating the hapless Lankan side one-sided in the first Test by an innings and 222 runs, the Men in Blue will now be eyeing another Test series whitewash at M.Chinnaswamy Stadium, where the second and last Test of this tour will be played from the 12th of March. This will be a pink-ball Test match and will be played under the lights. India has played a couple of pink-ball Test matches so far and managed to win both of those.

India won the toss and opted to bat first in the first Test. Before declaring their innings, they struck a massive 574 runs for the loss of eight wickets. Ravindra Jadeja scored a scintillating unbeaten 175 while Rishabh Pant piled up 96 runs. Ashwin stacked 61 runs while Vihari amassed 58 runs.

How excited are you for the pink-ball Test! ? ?

Coming to bat, Sri Lanka was bundled out for a mere 174 in the first innings, followed by a 178 in the second innings. Jadeja proved to be the star with the ball as well, he hunted a total of 9 wickets in the match, while Ashwin picked 6 wickets and Shami grabbed 3 wickets.

Sri Lanka would be hoping to better their performances in the second Test while the Indian team will be looking to make things worse for the visitors at Chinnaswamy.

Virat Kohli has scored 8007 runs in 100 Test matches at an average of 50.36 which includes 27 hundred and the highest score of 254. He looked in good touch in the previous match despite getting out on 45 and will look to put up a big score in this match.

Ravichandran Ashwin went past Kapil Dev in the previous match by picking up 436 wickets in his 85th Test. The off-spinner will be India’s best bowler in this match and also is pretty handy with the bat having amassed 2905 runs.

Dimuth Karunaratne is a very experienced player and has scored 5509 runs in 75 Tests at an average of 39 which includes 13 hundreds. The Sri Lankan captain will be hoping to lead from the front.

Suranga Lakmal will be playing his last Test match and the Sri Lankan pacer has been terrific in this format picking up 170 wickets in 69 matches and can be expected to do well with the pink ball.

The surface here is a pretty balanced one with something in it for both the batters and bowlers. The first session will be the easiest phase to bat and the pacers will enjoy bowling in the twilight session of the day which happens to be the 3rd session. Both teams will prefer to bat first.

The temperature is expected to hover around 22-27°C on the matchdays with 45% humidity and 18 km/hr wind speed. There are no chances of precipitation during the game.