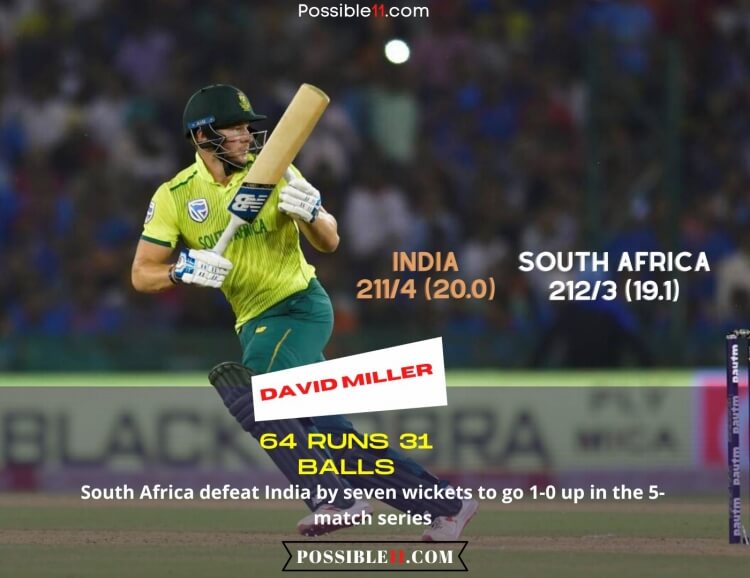 IND vs SA 2022 Watch Full Video Highlights: David Miller and Rassie van der Dussen showed great composure as the duo helped South Africa beat India by seven wickets at the Arun Jaitley Stadium in Delhi on Thursday. Van der Dussen, who was dropped on 29 by Shreyas Iyer, scored an unbeaten 75 off 46 balls. His partner Miller scored 64* off 31 balls. With this win, the tourists have taken a 1-0 lead in the five-match series. Earlier in the evening, Ishan Kishan enjoyed the proceedings after a scratchy IPL as he smashed 76 off 48 to power India to 211-4. The hosts, who were invited to bat first, got off to a strong start with Kishan and Ruturaj Gaikwad adding a 50-plus stand. Gaikwad was dismissed on 23 (15). The show continued with Kishan dominating the proceedings alongside Shreyas Iyer, who scored 36 off 27 balls. Captain Rishabh Pant chipped in with a 16-ball 29, while Hardik Pandya returned unbeaten on 31 in just 12 balls.

FOUR! RVD hits the winning runs! South Africa won by 7 wickets! This is the highest successful chase for South Africa ever. They end Indias 12-match winning streak in T20Is | Rassie van der Dussen is unbeaten on 75* and so is Miller on 64*

South Africa win by 7 wickets and go 1-0 up in the 5 match series.#TeamIndia will look to bounce back in the 2nd T20I.

Obviously a lot of hard work over the last few years understanding my game. Rassie played so well at the back end. Just try and hang in there, was the chat. He was trying to go but he wasnt getting it. Just about waiting for that loose ball. Belief. Understanding winning more games and more consistency gives you more belief. I am pretty open to bat anywhere. Just want to make a difference. Man-of-the-Match: David Miller (64* off 31; 5x6s, 4x4s)

We had enough on the board, but I think we were a little off with the execution. But sometimes you have to give credit to the opposition. Miller and RvD batted brilliantly. Slower balls were working when we batted, but the wicket got better in the second innings. India skipper Rishabh Pant