How India can still qualify for World Test Championship 2023 finals? 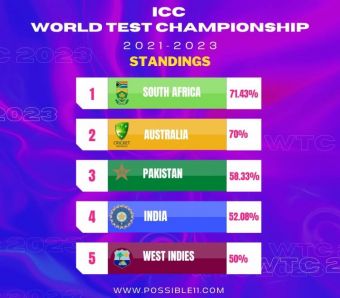 The Indian cricket team is all set to lock horns against England in the fifth Test match of last year’s five-match series, at the Edgbaston Stadium, starting from July 1. India currently has a 2-1 lead in the series and has a strong chance of qualifying for the ICC World Test Championship (WTC) final, for the second time in a row. India finished the 2019-21 cycle of the ICC WTC as the runners-up after losing to New Zealand in the final.

After losing in the inaugural World Test Championship (WTC) final to New Zealand in 2021, India had their eyes set on the final of the second edition which is scheduled to take place in 2023.

Jasprit Bumrah’s India on Tuesday lost the 5th rescheduled Test against Ben Stokes’ England by 7 wickets and drew the five-match Test series 2-2. Joe Root and Jonny Bairstow toyed with the Indian bowling attack as the duo scored an unbeaten 269-run partnership while chasing a mammoth target of 378 runs.

After dominating the game, for the most part, Team India had to settle with a convincing 7-wicket loss. The defeat has also affected the WTC ranking of the Indian Cricket Team as it took India’s win percentage to 53.47. India has also penalized two WTC points for maintaining a slow over rate. As a result, India is down to number 4 with a 52.08 win percentage.

How can India qualify for the ICC World Test Championship 2023 final?

To have any chance of reaching the final, India should try to win all of their next six matches. By winning these matches, India can gain 72 points and lift their percentage points to 68.05 which still may not be enough given lead Australia, South Africa, and Pakistan has over them.

Australia still has 10 Tests (1 vs Sri Lanka, 3 vs South Africa, 2 vs West Indies, and 4 vs India) to go in the ongoing cycle and they can finish at the top by winning six of them. India can go past Australia if they win all of their six matches and Australia fail to win at least six matches.

South Africa still has eight matches (3 vs England, 2 vs New Zealand, and 2 vs SL) to go. India can finish above the Proteas if they win all of their six matches and South Africa lose three of theirs.

Pakistan have seven matches (3 vs England, 2 vs NZ, and 2 vs SL) left and they can finish above India by winning six of them. Two losses or two draws could spoil the party for Pakistan.