Tokyo: Indias players celebrate after scoring a goal during a womens field hockey quarterfinal match against Australia at the 2020 Summer Olympics, in Tokyo, Monday, Aug. 2, 2021. Gurjit Kaur scored the goal.

The women have defeated world No. 2 Australia 1-0 to make it to the semifinals of the Olympics for the first time in history.

India stunned Australia 1-0 to reach the semifinals in women’s hockey of the Tokyo Olympics at the Oi Hockey Stadium North Pitch on Monday. This will be India womens hockey teams first semifinal appearance in the Olympics. They had finished fourth in the 1980 Moscow Olympics but the format was different, as there were no knockout games. 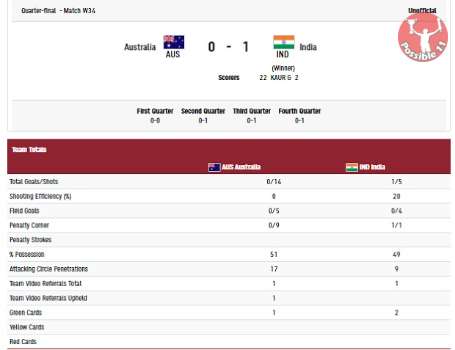 India, who qualified for the knockout stages after finishing fourth in Pool A, started on a positive note against Pool B toppers Australia and kept the pressure on them throughout all quarters.

India were clearly the dominant side with a 59% ball possession in the first quarter but the big moment came in the second quarter when dragflicker Gurjit Kaur converted India’s first penalty corner in the 22nd minute to put her side ahead.

India had five shots on goal compared to 14 of the World No.2 side but Indias defence was superb just like their midfield. They did not let Australia score despite conceding seven penalty corners in the match.

What a game!! Way to go ladies..✊?Absolute superstars ?#TeamIndia https://t.co/uG5EmQnLtY

India goalkeeper Savita Punia brought her A-game to the field and managed to save all 9 shots directed at her.

What a game, what a finish!