Hardik Pandya on His Comeback To The Team, no one knows the sacrifices 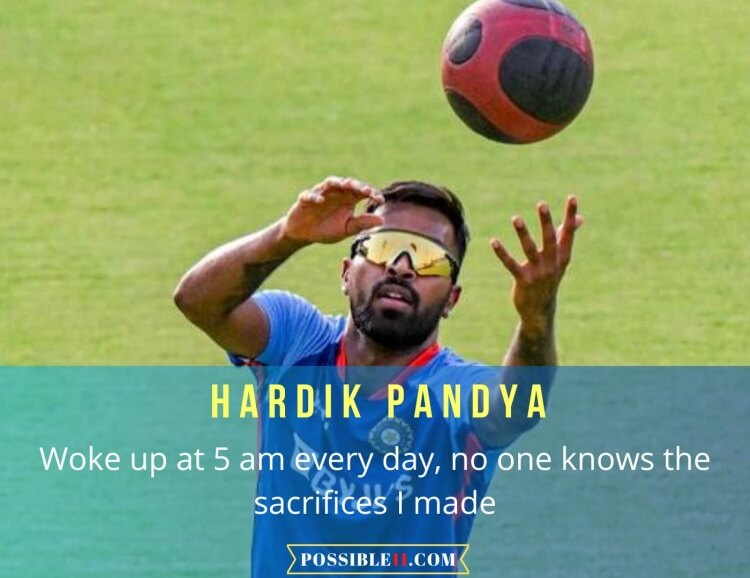 Hardik Pandya has talked about the sacrifices he had made and the amount of hard work that he had put in to make a successful comeback to the cricket field. The star all-rounder had taken an indefinite break from the game after the conclusion of the ICC T20 World Cup 2021 in November last year in order to rediscover his mojo with the ball.

Hardik Pandya did not play competitive cricket after the T20 World Cup in 2021 until IPL 2022 as he was recovering from persistent back injuries. Questions were asked about his lengthy stint on the sidelines after he had not bowled in the IPL for Mumbai Indians in 2021 and 2020. Hardik bowled sporadically for India at the highest over the last 2 years.

Speaking about his recovery process, Hardik said that he used to get up at 5 am in the morning daily. At the same time, the Baroda cricketer also went on to add that he was completely written off by many critics during that particular phase, but that did not bother him as he was more focused on his process and not interested in giving any reply to them.

"A lot of things were said about me before I made a comeback. For me, it was never about giving them answers. I was proud of the process I followed, no one knows exactly what I went through during the six months off," Hardik said.

"I got up at 5 am in the morning to make sure I trained and trained at 4 for the second time in a day to make sure I gave myself enough rest. I have slept for almost those 4 months at 9:30 pm. A lot of sacrifices were made but for me, it was the battle that I had before playing the IPL. It was satisfying to see the results.

"I knew that kind of hard work I did. In my life, I have always worked hard and not worried about the results. I have worked genuinely hard and honestly. That’s the reason I don’t get too excited when I do something special. It is not about that particular moment, it’s about the journey that kind of comes with it," he added.

From emotions on making a comeback to #TeamIndia and #TATAIPL triumph to goals for the future. ? ?

DO NOT MISS as @hardikpandya7 discusses this and more. ? ?

WORLD CUP IS THE GOAL

"Every series or every game you play is as important as your last. So, for me, World Cup is the goal, this is the right platform to get into the rhythm and a lot of cricket is going to come back to back. Always being in the rhythm is very important.

"My role will be changed here, I won’t be captain, I won’t be batting higher up the order and guiding through the innings. This will be back to be the Hardik for which I am known for," Hardik added