Exlained: Why India were given 3 byes after Kohli was clean bowled 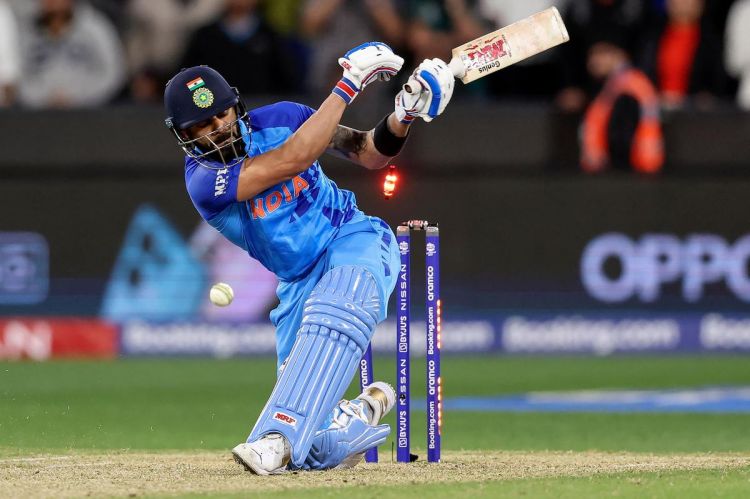 Virat Kohli, Team Indias star batter, led his side to one of the most remarkable victories in recent memory, as the Men in Blue prevailed in a thriller against arch-rivals Pakistan in their T20 World Cup opener in front of a packed MCG. India were down and out at 31/4 before Kohli and Hardik Pandya resurrected the innings with a 113-run stand to almost take the side to victory before the drama unfolded in the final over of the innings bowled by left-arm spinner Mohammad Nawaz.

On the last couple of deliveries of the 19th over, Kohli played two of the shots of the night against Haris Rauf, who was on fire, and the equation was now within touching distance for India with two set batters and a spinner to bowl - 16 required off 6. A wide, a no-ball, a free hit, a six, and a couple of wickets - the games final over had it all, and one of them became a huge point of contention, dividing opinions across the cricketing spectrum.

On the last couple of deliveries of the 19th over, Kohli played two of the shots of the night against Haris Rauf, who was on fire, and India was now within striking distance with two set batters and a spinner to bowl - 16 required off 6. A wide, a no-ball, a free hit, a six, and a couple of wickets - the final over of the game had it all, and one of them became a huge point of contention, dividing opinions across the cricketing spectrum.

Nawaz dismissed Hardik off the first delivery, and India scored three runs off the next two balls, putting the equation in Pakistans favour as the Men in Blue needed 13 runs off three deliveries. On the second delivery of the over, Nawaz bowled a full toss, but the umpire ruled it legal. Nawaz bowled a full toss again on the fourth ball, Kohli swung it hard, and even before he finished the shot, he was looking at the leg umpire, requesting a no-ball. The leg umpire, Marais Erasmus, did not move, but the one at the non-end, strikers Rod Tucker, did, much to the chagrin of the Pakistan players.

Since the ball had gone for a six, the equation had been reduced to 6 needed off 3. Nawaz bowled a wide and then bowled Kohli on the actual free hit, and he and Dinesh Karthik ran three runs. The Pakistan team was furious once more, crowding the two umpires to discuss why it wasnt declared a dead ball after Nawaz had cleaned up the batter. However, according to the rules, being clean bowled is not a legitimate dismissal off a free hit, and the umpire correctly gave it byes.

Many including former Australian cricketer Brad Hogg questioned the call saying, "Why was no ball not reviewed, then how can it not be a dead ball when Kohli was bowled on a free hit?" However as per the MCC’s Laws of Cricket:

20.1.1.1 it is finally settled in the hands of the wicket-keeper or of the bowler.

20.1.1.3 a batter is dismissed. The ball will be deemed to be dead from the instant of the incident causing the dismissal.”

The free hit only allows for four dismissals: handling the ball, hitting the ball twice, obstructing the field, and running out. As a result, India was correctly awarded three runs, and the equation was reduced to two needed as many balls.

The drama was far from over. Nawaz stumped Karthik off the next delivery, reducing the equation to 2 needed off the final ball. However, R Ashwin, as cool as a cucumber, left a leg side delivery for a wide and ran a single off the final ball to lead India to a memorable victory.