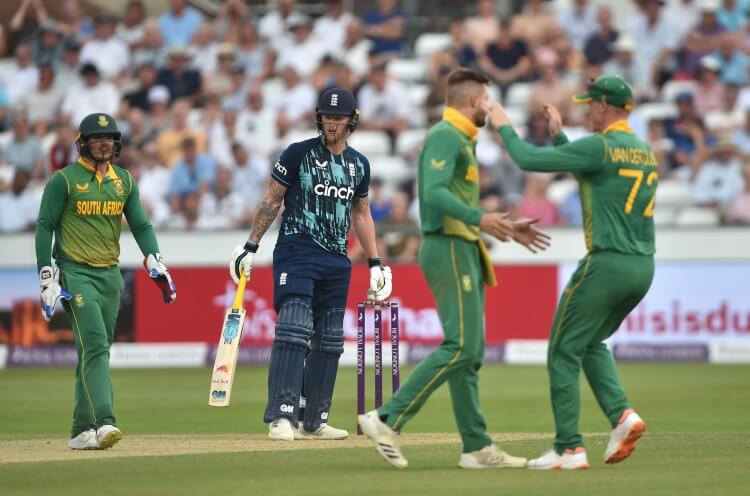 ENG vs SA will face each other in the second ODI at Old Trafford, Manchester on Friday 22 July. The Proteas will be hoping to seal the three-match series with one more win under their belt. This led them to an emphatic 62-run victory in the first match.

England, on the other hand, will miss Ben Stokes in this game and Phil Salt is likely to feature in the XI. Players like Joe Root and Jonny Bairstow will be crucial for the team to level the series, while the bowlers will have to control the runs.

Rassie van der Dussen - Rassie van der Dussen hit 134 runs in the first ODI. He will be hoping to continue this rich vein of form, especially given his remarkable record against England. The 33-year-old has an average of 75.67 at a strike rate of 98.27 in five ODIs vs the Englishmen.

Jason Roy - Jason Roys partial average and strike rate in seven ODIs at Old Trafford are 19 and 112.71 respectively. South Africas fast bowlers will try to get him out early in the innings. If it doesnt happen then Jason Roy will say to play long innings.

Keshav Maharaj - Keshav Maharaj has fared reasonably well in the three ODIs that he has featured in England. The off-spinner has taken five wickets at a bowling average and strike rate of 27.80 and 31.40 in these games.

Joe Root - Joe Root has scored two centuries and three half-centuries in 13 ODIs against the Proteas at an unbelievable average and strike rate of 52.31 and 89.36 respectively.

The surface at Old Trafford gets better as the day progresses. Though this is a day-night game, there will be something in it for the fast bowlers early on. Out of 56 ODIs played at the venue, 26 have been won by teams batting first while 29 have been won by the chasing side with 228 being the average score.

On match day the weather forecast in Manchester is good for cricket matches. There is some chance of rain but it is possible that our match may be interrupted.