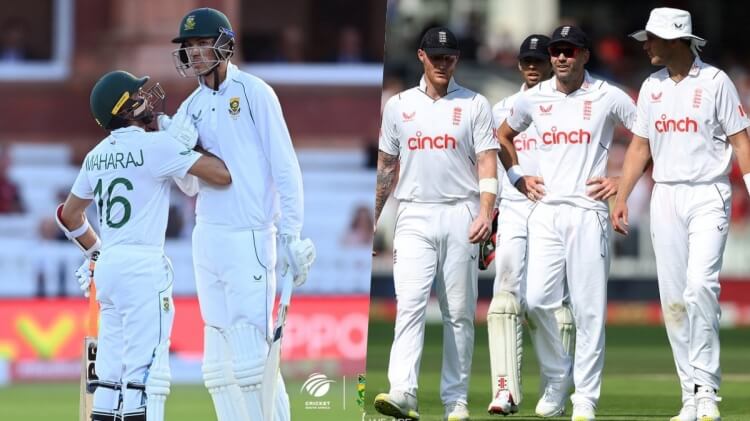 South Africa took a 1-0 lead in the Test series after beating the hosts by an innings and 12 runs in the Lords Test match. In the first match for South Africa team, Kagiso Rabada, Marco Jansen, Sarel Ervi performed well, due to which the team managed to win the match.

Captain Ben Stokes and Stuart Broad performed all-round in the first match for the England team. In this match, the England team is expected to perform well from players like Joe Root, Jonny Bairstow. The England team will take lessons from their past mistakes in this match with the intention of leveling the series, while the South Africa team would like to maintain their dominance in this match as well.

South Africa defeated England by an innings and 12 runs inside three days in the first Test at Lords, England. Kagiso Rabada, who got match figures of 7/79 was adjudged player of the match. It proved an emphatic triumph for South Africas bowling attack, who nullified the threat of Englands new attacking batting Bazball approach, forging a 161-run first innings lead before dismissing their hosts in only 37.4 second innings overs. Dean Elgar and Sarel Erwee will probably open the inning. Keegan Petersen will bat at the one-down position. Rassie van der-Dussen and Aiden Markram will handle the middle-order batting. Dean Elgar will lead the South Africa as a Captain. He is also a good Batsman Kyle Verreynne will do the Wicket Keeping for South Africa. Keshav Maharaj will take care of the spin bowling of the team. Marco Jansen and Anrich Nortje will lead the pace attack of his team.

Englands batting was clueless against South Africas pace bowling. Their openers were struggling while Joe Root the man in form could not made an impact as well. To get back on track , Englands batter need to make impact. Alex Lees and Zak Crawley will probably open the inning. Ollie Pope will bat at the one-down position. Joe Root and Jonny Bairstow will handle the middle-order batting. Ben Foakes will do the Wicket Keeping for England. Jack Leach will take care of the spin bowling of the team. Stuart Broad and Matthew Potts will lead the pace attack of his team.

Kagiso Rabada He is the fifth best bowler in the world in the ICC Test Rankings, he has taken 250 wickets in 53 Test matches. Can present a good challenge to you.

The weather is likely to remain cloudy on all 5 days of the test. The temperature will be in the range of 15 to 18 degrees.