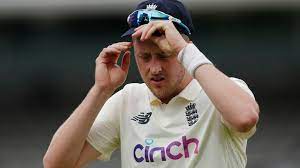 Robinsons racist and sexist tweets as a teenager, in 2013, has landed him in a massive controversy

England speedster Ollie Robinson made a fine start to his Test career, bagging two wickets on Day 1 of the first Test against New Zealand at Lords. While the cricketing world was beginning to praise Robinson, some old sexist and racist tweets of his resurfaced on Twitter.

Soon after the first Test between England and New Zealand ended in a draw, the England Cricket Board (ECB) announced its decision to suspend young pacer Ollie Robinson from international cricket. The 27-year-old was easily the biggest talking point of the opening Test, of the two-match Test series, following the emergence of his controversial comments on Twitter -- which was made in 2012 and 2013.

"On the biggest day of my career so far, I am embarrassed by the racist and sexist tweets that I posted over eight years ago, which have today become public. I want to make it clear that Im not racist and Im not sexist," Robinson said in a statement released by the England and Wales Cricket Board.

"I deeply regret my actions, and I am ashamed of making such remarks. I was thoughtless and irresponsible, and regardless of my state of mind at the time, my actions were inexcusable. Since that period, I have matured as a person and fully regret the tweets."

As a result of his suspension, the speedster will leave the England squad immediately and, hence, will also not be available for selection for the second and final Test, which gets underway from June 10 in Edgbaston.

"England and Sussex bowler Ollie Robinson has been suspended from all international cricket pending the outcome of a disciplinary investigation following historic tweets he posted in 2012 and 2013," the ECB said in a statement on Sunday.

Here are some of Robinsons tweets that have since gone viral: 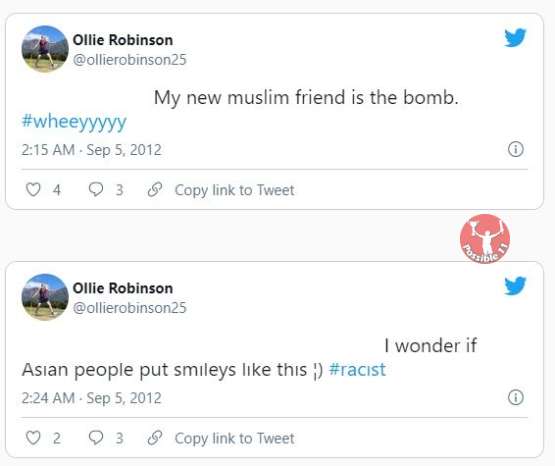 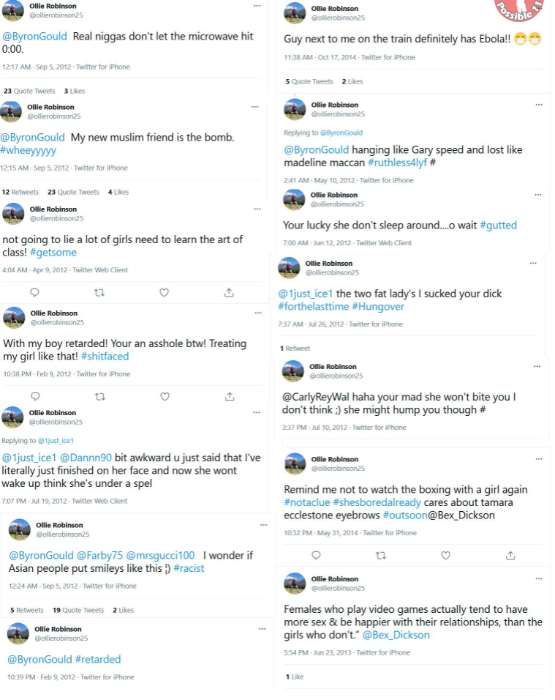 As for his performance on the field during his debut Test, Robinson showed nerves of steel as he returned with 7 wickets overall and contributed with a fine 42 in Englands first essay. Speaking after the match, England Test captain Joe Root said, "Hes (Robinson) contributed well with the bat, his performance with the ball was excellent. Hes showed high levels of skill and hes definitely got the game that can be successful in Test cricket."

He further opined, "But in regards to the stuff thats happened off the field, its not acceptable within our game. We all know that. He addressed the dressing room straight away. He obviously spoke to you guys and other media outlets straight away, fronted up to it. He showed a lot of remorse from that point onwards. You can see its very genuine from how hes been around the group and the team.

"I couldnt believe them [the tweets], personally. I didnt really know how to take it on the surface. I think the most important thing is Ollie is part of this dressing room and we had to support him. We had to try and do everything that we could to give him an opportunity to learn and understand he has to do better.

"I think its a great lesson for everyone within our game that we can all do more. We all have to keep looking to educate ourselves, trying to better the environment for everyone, trying to be as inclusive as we can, keep making everyone feel comfortable to play what a wonderful sport we have," added Root.