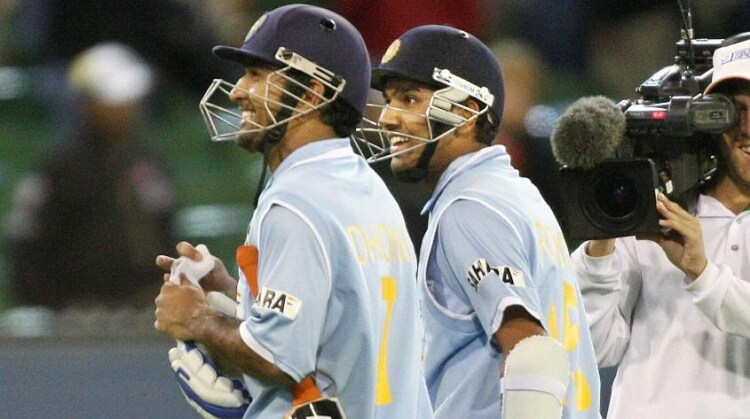 Dhoni is known for his cool and calm demeanour, both on and off the field. In all the time he captained India across formats, he tried to instill this attitude in his team-mates and budding cricketers.

An interesting anecdote to this effect was revealed in journalist Bharat Sundaresans book The Dhoni Touch, which was just released. Sundaresan revealed how Dhoni asked his team not to celebrate exuberantly when India were on the verge of beating Australia in a one-day international at the Melbourne Cricket Ground (MCG) in 2008.

Australia were the reigning world champions back then and Dhoni was leading India for only the 15th time in ODIs. After India chased down the 160-run target with five wickets in hand, Dhoni advised a young Rohit Sharma to make the customary post-match handshakes as deadpan as possible, just to let their opponents known that India treated a victory over Australia the same way they treated a win over any other nation and an Australian defeat was no longer an upset.

In February 2008, India were chasing down a facile total of 160 against Australia at the Melbourne Cricket Ground (MCG). It was only the fifteenth ODI as captain for MS Dhoni, and he was at the crease with Rohit Sharma. With 10 runs to win, he called for a needless change of gloves. In cricket, it’s generally with a pair of gloves that you see information arriving from the dressing room. Dhoni was doing the opposite though. He was sending a poignant message back to the pavilion. ‘Nobody will celebrate on the balcony once we win this match.

How dhoni executed the celebration

Meanwhile, in the middle, Dhoni was handing down instructions to Rohit, on how the youngster should conduct himself while shaking hands with the Aussies once the match got over. He wanted it to be as tepid as possible. ‘When they give their hand, just firmly hold yours out without folding it like an obligation, but don’t overdo it. And just stare blankly at them without any hint of excitement. This was Mahi’s way of saying it’s no big deal. My bowlers got them all out for 160 and we are chasing it down, usme kaunse badi baat hai (there’s no big deal in it). If we celebrate wildly, the Aussies will be vindicated in their belief that this was an upset. We wanted to tell them that this is not a fluke. This is going to happen over and over again. The Aussies simply couldn’t handle it. They were shaken,’ a player from that tour revealed much later.

The calmness of Dhoni

This was back when the Australians were still at their indomitable best. Beating them meant a big deal to any opposition, that too in their own backyard at the mighty MCG. It was a period when Ricky Ponting’s team believed that every loss was an ‘upset’ and not just a win for their opponents. India had dominated this particular match from the beginning. Ishant Sharma, Sreesanth and Irfan Pathan had gathered nine wickets between them and shot out the hosts for just 159. India had more or less cruised to their target and now Dhoni the rookie wanted to give his all-conquering, world-beating counterpart his version of the cold shoulder