On Saturday, June 26, England, led by Eoin Morgan, churned out a 3-0 clean sweep against Sri Lanka in the T20I series. After dominating at the Sophie Gardens in Cardiff, the hosts won the third and final match by 89 runs at the Rose Bowl in Southampton. The Kusal Perera-captained visitors did a reasonable job while bowling, but their batting unit flattered to deceive yet another time.

Unlike the first two games, the Brits batted first and got off to a flying start. Dawid Malan, the ICC’s no.1 ranked T20I batter, and Jonny Bairstow laid the platform. The duo put on 105 runs for the opening wicket in 70 balls.

Bairstow was steady as he got to his fifty off 41 balls and went on to score a 43-ball 51. Isuru Udana castled him to break the partnership, which was threatening quite a bit. Liam Livingstone hit two fours, but after he perished to Dushmantha Chameera, the Brits’ inning capsized a wee bit.

From 143 for two, the hosts slumped to 162 for six in a space of 22 balls. Malan played until the 19th over and notched 76 runs off 48 balls with five fours and four sixes. Chameera picked up four wickets and made sure that England could post only 180 after the blistering start. 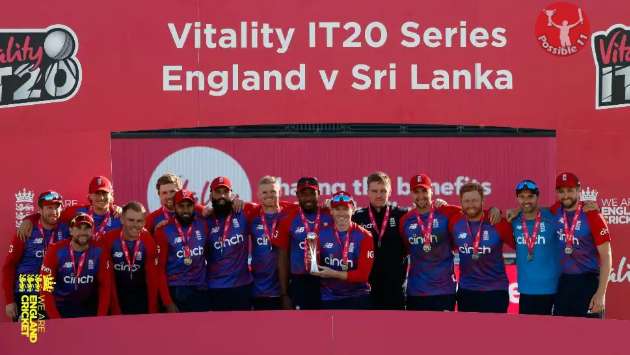 In the run-chase, the Lankans could never find themselves in front of the eight-ball. Once David Willey got rid of Danushka Gunathilaka in the first over, there was no stopping the Three Lions. In the powerplay, Lanka were reduced to 39 for three.

Among the top and middle-order batters, Oshada Fernando and Niroshan Dickwella got into double digits, but both couldn’t covert. Binura Fernando entertained with a 14-ball knock of 20 before Liam Livingstone rattled his woodwork.

The home team attacked with the fast bowlers as Willey, Chris Woakes, Chris Jordan, and Sam Curran bowled their quota of four overs each and picked up a combined tally of seven wickets. Adil Rashid, who picked up four wickets in the first two matches in Cardiff, was given only a solitary over.

Here’s how the netizens reacted to England’s win:

Sam doing what he does best! ?