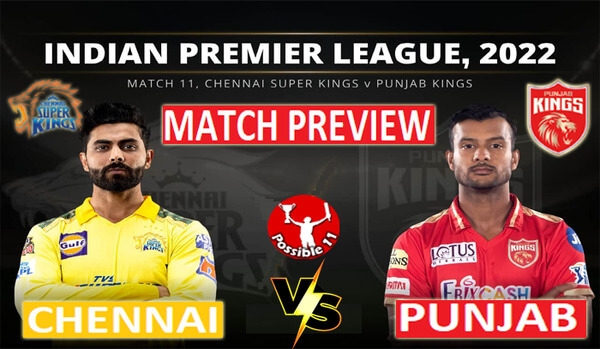 Chennai Super Kings will be squaring off against Punjab Kings for the first time in the eleventh match of this season of the Tata IPL.

These two teams played 26 matches against each other in the history of the IPL where Chennai Super Kings won 16 matches while Punjab Kings managed to win 10 games.

Rituraj Gaikwad will be under pressure

Rituraj Gaikwad, the highest run-getter of the previous leg, will also have to score runs. Expect Mahendra Singh Dhoni to do well in the middle overs And he can play the role of finisher. While there are some big hitters in the Punjab Kings team but misses against KKR.

Went. After the six-wicket loss, the team will be desperate to get back into the winning streak and expect its batsmen to contribute.

With Mayank Agarwal, Shikhar Dhawan and Bhanuka Rajapaksa in the top order, Punjab can easily dominate the attack of the rival team. Odeon Smith and Shah Rukh Khan are also known to deliver the ball and will need to play the role of finisher more consistently. Punjab included Nekagiso Rabada in their attack but none of the bowlers could work against Andre Russell. Therefore, they will soon have to unite and bowl in the right area. The role of the two spinners, Rahul Chahar and Harpreet Brar, will be crucial and could be a key factor in the outcome of the match.

Punjab Kings would like to start with a win again

In this match between CSK vs PBKS to be held on Sunday, talk about Punjab Kings, after getting a thrilling win in the first match, the team has to lose its second match against KKR. Apart from Bhanuka Rajapaksa, none of the batsmen played the bat in the match that concluded on Friday. After scoring 20-30 runs, the whole team was piled up in 10.2 overs. Neither player played a responsible innings and in the end, the bowlers also lost their grip on the match and the match was lost by the team led by Mayank Agarwal.

Robin Uthappa is a right-handed batsman from Chennai Super Kings. He has hammered 78 runs in this tournament so far and can come in handy once again here.

Moeen Ali is a left-handed batsman and right-arm off-break bowler from Chennai Super Kings. He smashed 35 runs in the last game and will be an essential pick for this match as well.

Ravindra Jadeja is a left-handed batsman and left-arm orthodox spinner from Chennai Super Kings. He has smacked 43 runs in this tournament so far. He has the potential to contribute with both the bat as well as the ball.

Bhanuka Rajapaksa is a left-handed wicketkeeper-batsman from Punjab Kings. He has stacked 74 runs in this tournament so far. He has looked in outstanding touch in this tournament and can make a significant impact once again here.

Shikhar Dhawan is a left-handed batsman from Punjab Kings who opens the innings. He has smacked 59 runs in this tournament so far and will be an essential pick for this match.

The batsmen are having fun on the pitch of Brabourne Stadium. High-scoring matches can be seen here. The good thing is that both CSK and Punjab have scored more than 200 scores in the current tournament, so considering the depth of their batting, the Brabourne Stadium may rain runs today. In the current IPL, the team batting in the second innings has got more success. Dew has also rained heavily here. In such a situation, the team winning the toss will definitely prefer to field first. If the match is to be held in the evening, then the fans will see the ball going more than the boundary.

The match between Chennai Super Kings and Punjab Kings is to be played in the evening, where the players will feel relief from the heat. The weather in Mumbai is a bit cold in the evening. Today the clouds are very clear in Mumbai and there is no chance of rain, then the fans can get to see the full 40 overs match. The highest temperature here will be 32 degrees Celsius. In the evening, it will fall to 28 degrees. The wind will go at a speed of 8kmph. The humidity in the season will be up to 79 percent.