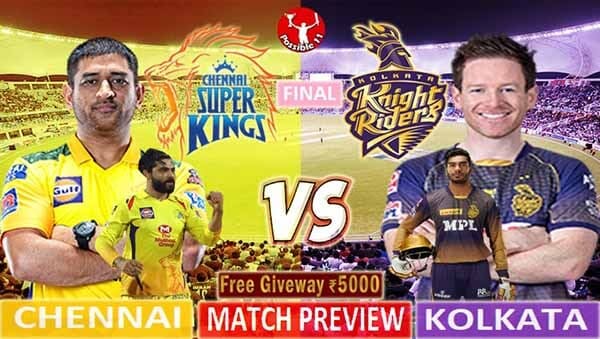 IPL 2021 Final: Chennai will play the final for the record 9th time, KKR have a chance to win the title for the third time, Match Preview

IPL 2021 is about to reach its end. Three-time champion Chennai Super Kings and two-time champion Kolkata Knight Riders will face each other in the final of the 14th season to be held today. In this match, both teams will be seen trying hard for the title. The match will be played at the Dubai International Cricket Stadium from 7:30 PM.

Chennais team finished second in the points table after winning nine out of 14 matches in the league round. During the playoffs, Chennai defeated Delhi in Qualifier-1 to directly qualify for the final. At the same time, Kolkatas team finished fourth in the league round by winning seven matches out of 14. During the playoffs, this team performed brilliantly, first defeating Royal Challengers Bangalore in the Eliminator, then defeating Delhi Capitals in Qualifier-2 to reach the final. In such a situation, the morale of the KKR team will be very high.

Know when both the teams won the IPL title?

Talking about the figures, so far there have been a total of 27 matches between the two. In this, Chennai has won 17 and Kolkata has won nine matches. One match yielded no result. The two teams have met thrice in the UAE. Of these, one has been won by KKR and two by CSK.
Out of the last five matches between the two, four have been won by Chennai and one by Kolkata. Chennai has won two matches two this season. The teams of Chennai and Kolkata will face each other in the IPL final after nine years. In the final of 2012, Kolkata defeated Chennai. The team of Chennai will go out to take revenge.

At the same time, Kolkatas team has reached the final only twice and won the title both times. Apart from 2012, Kolkata won the trophy in 2014 by defeating Punjab. In such a situation, this match is not going to be easy for Chennai, because KKRs win percentage in the final is 100 percent.
At the same time, talk about Dhonis captaincy, the team of Chennai has won the title in 2010, 2011, and 2018. He has faced defeat in the final five times. They were defeated by Rajasthan Royals in 2008, Kolkata in 2012, Mumbai Indians in 2013, 2015, and 2019.

These players of CSK will prove to be a game-changer

Faf du Plessis, Ruturaj Gaikwad, Moeen Ali, and Ravindra Jadeja have all done well with the bat for CSK. But they now have to face the spin trio of KKR like Varun Chakravarthy, Shakib Al Hasan, and Sunil Narine. The pitch in Dubai is good as compared to the slow pitch in Sharjah. In such a situation, Ambati Rayudu, Robin Uthappa, and Dhoni can be beneficial in the middle order for CSK. Apart from these, Deepak Chahar, Shardul Thakur, Josh Hazlewood, and Dwayne Bravo have done better for CSK with the bowling.

Eyes will be on these players of KKR

Talking about the Chennai team, young Rituraj Gaikwad is running in excellent form. He has scored 603 runs in 15 matches and after scoring 24 runs, he will win the Orange Cap. At the same time, Faf du Plessis has scored 547 runs in 15 matches. It will be the responsibility of both of them to get off to a good start once again. At the same time, Robin Uthappa played a brilliant half-century in the last match at number three.

In this match too, he will be given preference over Suresh Raina. In the lower order, Dhoni, Moeen Ali, Dwayne Bravo, and Ravindra Jadeja can bowl aggressively. Even in front of Kolkatas strong bowling line-up, captain Dhoni would be expecting a great performance from the batsmen.

The CSK bowlers also seem to be in good form. Shardul Thakur is looking in great form and has taken 18 wickets in 15 matches so far. Dwayne Bravo, Josh Hazlewood, and Deepak Chahar have supported him well so far. Ravindra Jadeja and Moeen Ali will be seen handling the spin department.

On the other hand, Kolkata Knight Riders, after struggling in the first phase, performed brilliantly in the second phase. In the second phase, the team has won seven out of nine matches so far. The team is full of confidence after winning the last four matches in a row. All the credit goes to the young batsman Venkatesh Iyer. He has scored 320 runs in nine matches at an average of 40 and a strike rate of 125. This includes three half-centuries.

Shubman Gill is also in good form. He has so far scored 427 runs in 16 matches this season with the help of two half-centuries. In the last two matches, Shubman and Venkateshs excellent opening partnership has given Kolkata victory. Rahul Tripathi and Nitish Rana are also batting well. The matter of concern for Kolkata is the form of captain Eoin Morgan. He has scored 129 runs in 16 matches so far this season.

Among the bowlers, Varun Chakravarthy, star all-rounder Shakib Al Hasan, Lockie Ferguson, Sunil Narine and Shivam Mavi have bowled well and troubled the front. In the last two matches, this bowling line-up has troubled the strong batting line-up of Delhi and Bangalore. In such a situation, the batsmen of Chennai will have to bat carefully.

Probable Playing 11 of CSK vs KKR: