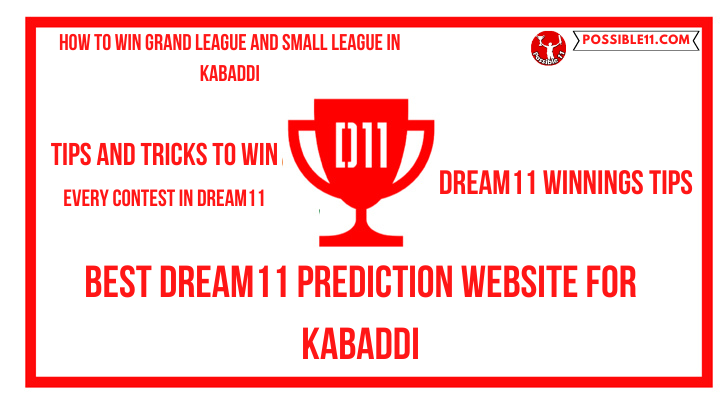 Kabaddi is a contact team sport, native to the Indian subcontinent, played between two teams of seven players each. The objective of the game is for a single player on offense, referred to as a raider", to run into the opposing teams half of a court, tag out as many of their defenders as possible, and return to their own half of the court, all without being tackled by the defenders, and in a single breath

All changes to win grand and small leagues are given by Possible11. Keeping in mind that it includes all Kabaddi Dream11 matchups with all the historical performance data of the players and their top fantasy advice taking into account the best playing lineup. Make the team with the following points in mind and win both the Grand and Small leagues

Tips And Tricks To win Every Contest In Dream11

Select players in your team from playing squad:-

Picking players that are not likely to play is a big going to be very Risky. Players such as Pardeep Narwal, Nitin Tomar, Rishank Dewadiga, Maninder Singh, Fazel Atrachali, etc. are almost certain starters and it is very rare they will be dropped.

It’s important to make sure that you analyzed the previous lineups and identified which players appear the most which can give you an indication of which players are almost going to be the part of starting seven.

All those who watch or play Kabaddi know that raiders pick up touchpoints much more frequently than defenders scoring tackle points which means in maximum condition or matches raiders are more likely to score higher fantasy points than the defenders.

All-rounders who are main raiders and defend as well are also great fantasy players, such as Sandeep Narwal. The best way to take advantage of this is to pick raiders that raid a lot and also pick at least 3 raiders.

There are some players that cannot be ignored as they are experts in their game like Virat Kohli in Cricket. Players such as Pardeep Narwal, Rohit Kumar, Nitin Tomar, Maninder Singh, and Surender Nada are sure starters and they all have a very high point per game ratio.

Must Pick Players are those players who have been doing well with consistency and they have a huge fantasy potential and by not picking them you may have the risk of missing out on big points leaving you unable to beat your Fantasy opponents.

Its a crucial element of playing fantasy is spotting the differential, the player that many opponents won’t pick but will score you big points.

By picking players that are about to get back their forms like players returning from injury or rest can give your fantasy team a big boost over other opponents teams.

It’s another important element in choosing the right captain and vice-captain in your Fantasy Team.

As we mentioned earlier that raiders tend to score much more points than defenders so selecting the captain and vice-captain as raiders will tend to give you an advantage more often than not.

Although it also depends on what type of game you are expecting, if it is a defensive low scoring game then only a few points will be scored by raiders so you might consider captaining one raider and one defender.

Possible11 is the best dream11 kabaddi team prediction site. Because when it comes to providing kabaddi fantasy tips and dream11 predictions we provide best chances of winning grand league and small league. We cover all kabaddi matches with best lineup and play. We check all past records of players and then our fantasy experts give the Dream11 teams with the highest winning chances. Thats why possible11 is the best kabaddi prediction site in the world.

How To Make Dream11 Kabaddi Team

Every Kabaddi team you create on Dream11 has to have 7 players, of which a maximum of 5 players can be from any one team playing the real-life match.

Your Dream11 can have different combinations of players, but has to be within the 100 credit cap and must qualify the following team selection criteria