Best Cricket Records That Will Never Be Broken ? 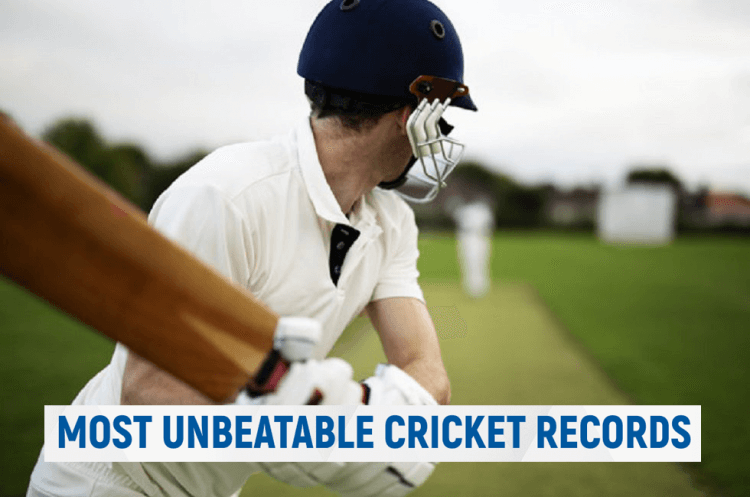 Today we will talk about some of the best cricket records which will never be broken. 10 Cricket Records That Are Almost Impossible To Break

One of the most favourite players from the Indian cricket team, Rohit Sharma, has made the unbeatable and a historic record of three double centuries! It is impossible to be made in the ODI match, and no one has ever seen it again. We have not witnessed any moment like this again.

We all know our legend, famous for making the maximum number of centuries, Sachin Tendulkar. Still, if we talk about first-class cricket, it is the player who has made the highest number of centuries possible. He is SIR JACK HOBBS. He is an international player and has set up the target for first-class cricket matches. This record is something that is not being broken to date.

This is an incredible record made by the famous player of team Sri Lanka. Muttiah Muralitharan managed to pick some 800 wickets in 133 tests, 534 wickets in the 350 ODI’S, and 13 wickets in 12 T20s. And all over in total, if we see it, there are around 1347 international wickets taken by the player. This is something colossal! We do not see something like this now. These are some records that cannot be broken and have been just made!

The next on the list, however, is Shane Warne who collected 1001 international wickets in total, which is almost 25% less than the highest one set by Muralitharan.

The only cricketer who has served as a captain at the age of 50 was Dr. William Gilbert Grace in 1899. This was the year that marked his cricket’s last test match against Australia. He, later on, handed over the captaincy to Archie MacLaren.

Australia has made a record of winning 50-over World Cups consecutively for 3 years i.e., 1999, 2003, and 2007. All under the captaincy of Ricky Steve Waugh and the rest two under the captaincy of Ricky Ponting respectively. For the same match, the former wicket-keeper of the team scored 50+ runs in the same three World Cup Finals, setting yet another record. The record set by the latter too is believed to remain unbreakable. It is quite tough for one team to qualify in the World Cup finals back-to-back three times in a row

Australian cricketer Don Bradman played 52 matches, scored 6996 runs, recorded 29 centuries with 13 fifties, and had set a record batting average of 99.94. The legend played his last test match in 1948. It has been more than seven decades and no one has even dared to challenge the record set by the player. However, next to him is young Aussie player Marnus Labuschagne with an average of 63.43, though he just scored 1459 runs to date.

Moreover, in his cricket career, Bradman also scored 100 runs in only 3 overs. This was in 1931 when the match between Blackheath and Lithgow took place. The legend scored a century in just 18 minutes, setting an unbreakable record in the history of cricket.

we all know that to have a dot ball is also very challenging in the game and then having a maiden super over is a massive thing to be seen. The very famous bowler of the team of West Indies, Sunil Narine, was the first player who made his chance to play the maiden super over. In 2014, both the Red Steel and the Amazon Warriors ended at a somewhat same score which was 118/8 and 118/9, respectively, in 20 overs. It was the Caribbean Premier League held, and this score was seen and then there was a time of maiden super over. These things are seen very rarely and create history, and it’s a blue moon thing that happened in 2014.

Also Read: Which is The best Dream11 prediction app? for cricket, football

Surprising but true. English cricketer Jim Laker picked up 19 wickets in a single test match against Australia in 1956. It was an incredible achievement by the bowler who bowled 68 overs in the game while only conceding 90 runs. The record even after so many years, acquires the top place whenever the highest wickets taken by a cricketer in a test match are talked about. Though in 2018, Yasir Shah picked 14 wickets, still the record set by Laker is as is and is believed to remain so forever

While Muralitharan took the most wickets in international cricket, English player Wilfred Rhodes collected 4204 wickets. He recorded the highest scalps for first-class cricket. In his cricket career of 30 years, which is also a record in itself, he set a record that is not only hard but also impossible to break.