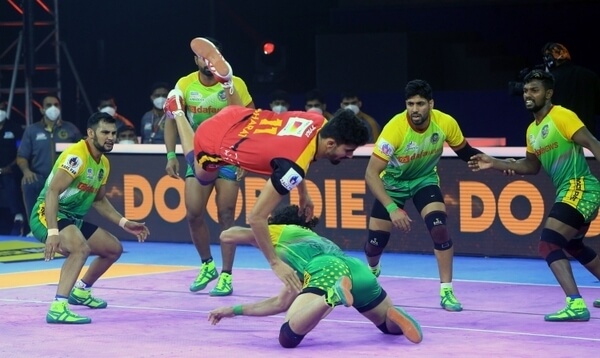 Welcome to the 125th match of the Pro Kabbadi League Season 8, 2021 where Bengaluru Bulls takes on Haryana Steelers. Bengaluru Bulls have played 21 matches so far with 10 wins and nine losses, bagging 61 points.

They are just five points away from bagging the direct semi-final spot. This is their last league game and they would be aiming for that direct knockout spot and have their hands on the trophy.

Their previous encounter was against Patna Pirates and won by 36-34. Haryana Steelers have been brilliant in this tournament with 10 wins and seven losses. They managed to tie three encounters and bagged 63 points so far.

They have been in exceptional form and would be aiming for the direct semi-final spot going into their next two encounters. With Haryana having two more league games, they have a very good chance of ending up in the top two. Haryana is in pretty good form and they would be aiming to end the league stage on a high by bagging two big wins.

Pawan Sehrawat: Pawan Sehrawat is among the top raiders in the competition and has the ability to win games by himself. He was the top raider last season and his extravagant performances this season have ensured he reclaims the top spot this season as well. The Bengaluru man has taken his tally to 261 raid points, however, he had a few average games recently and would need a huge turnaround.

Saurabh Nandal: Saurabh has emerged as the leader of the Bengaluru defense and has played with panache. The right-corner defender has brought out his best this season and his tally for the season reads 58 tackle points and is the top-scoring defender for his team and 4th overall. He is one man Haryanas raiding unit would be wary of.

Bharat: Bharat is a fine raider and has time and again proved his credentials over the course of the season. He will be one of the most important players for the side tonight as he looks to take his tally past 101 raid points and 10 tackle points.

Jaideep Kuldeep: Jaideep Kuldeep has looked a class apart with his defense and the left-corner defender has registered 60 tackle points in just 20 games, which puts him at 3rd on the list of top-scoring defenders. He has formed a formidable unit with fellow defenders and has troubled most raiding units.

Vikash Kandola: Vikash Kandola is a fine raider and he has done really well thus far. He has had an odd off game in between but has done well lately to take his tally past the magical three-figure number to 169 raid points. He will look to bring his best on the mat tonight and will hold the key in this game.

Ashish: Ashish hasnt been in the limelight but the young raider has done a fine job thus far. He hasnt just raided well but has been proactive in taking up the defensive duties. He is in fine form and had a good outing in the last 3 games, scoring 28 raid points and 8 tackle points to take his tally to 41 raid points and 16 tackle points for the season. Expect another solid show from the strong man.