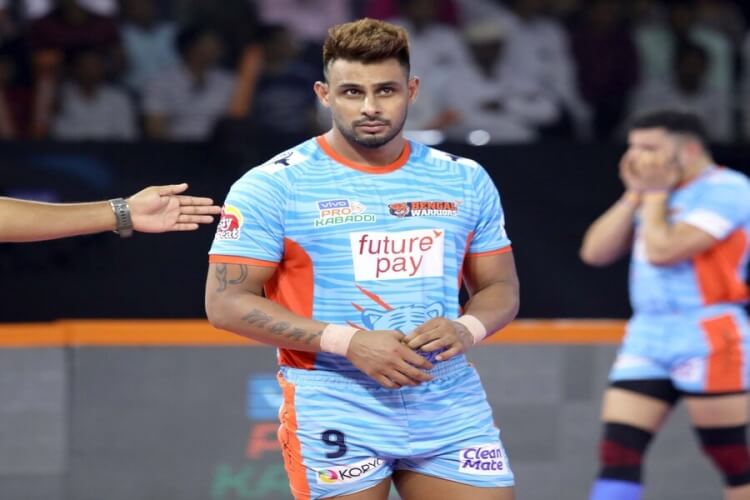 After playing the final game of the triple-header on Tuesday, Tamil Thalaivas will start theproceedings on Wednesday evening.

Thalaivas have now lost 6 on the trot and are out of contention. They are playing for pride but might want to gives youngsters a chance.

Their opponents Bengal Warriors are out of the race as well and are 11th on the table. They havent won a game in the last 5 matches.The game might offer exciting young talents on display, though there isnt much to play for.

Maninder Singh: Maninder Singh is the top raider in the Bengal Warriors side and has been one of the major reasons behind Bengal Warriors victories this season. The tall and strong raider has had a solid season, registering 237 raid points in 20 games. He didnt have the best of games last timearound and would be keen to turn it around He is 2nd on the charts of top-scoring raiders and willbe looking to go big in this game.

Ran Singh: Ran Singh is an experienced defender and has added the much-needed steel to Bengals defense. The experienced left corner defender has secured 31 tackle points in just 12 games, and will be a player Tamils raiding department would be wary of.

Manjeet: Manjeet had a sensational last season and has now emerged as the lead raider for the Tamil Thalaivas outfit. The youngster has had a bright season thus far with 153 raid points to hisname. He had a torrid last game and managed just 1 raid point. He doesnt shy away from putting ina tackle either and has 8 tackle points to his name. He will have a big role tonight if Thalaivas are towin this.

Surjeet Singh: Surjeet Singh is a leader in defense and has done a phenomenal job for theThalaivas. The right cover defender has featured in 19 games thus far and has registered 53 tacklepoints, which puts him in the top 10 scoring defenders this season. He will need to shoulder a lot ofthe responsibility tonight.

Sagar: Sagar is a solid defender and came into the limelight in the last season. The right-corner defender has been aggressive in putting up tackles and has taken his tally to 75 tackle points, which sees him at the top of the list of top-scoring defenders. He has been terrific over the course of the season, though his recent form has been poor, and would hope he can turn it around tonight.