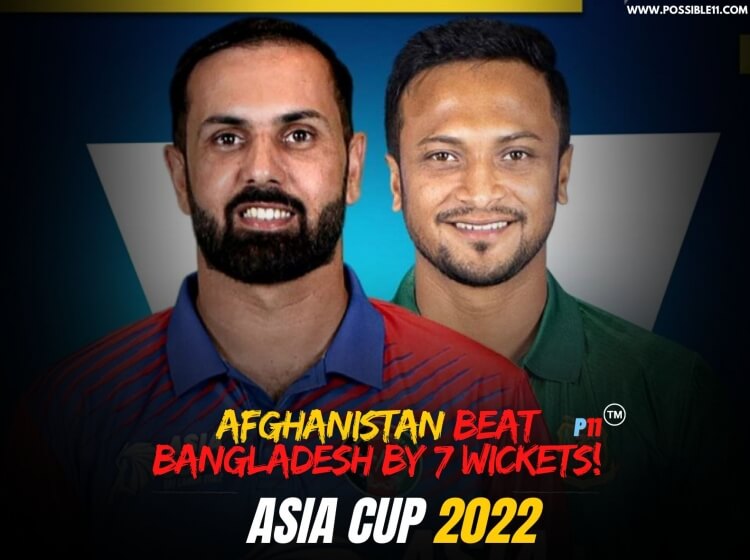 SIX! Another maximum from Afghanistan to finish the game. Najibullah Zadran hits that straight down the ground to give his team the victory. Afghanistan won by 7 wickets.

Shakib Al Hasan: It is always tough when you lose 4 wickets in the first 7-8 overs. We were in the game for the first 14-15 overs. Credit to Afghanistan. In a T20 game, whoever is standing up for the team should it take it till the end. Mosaddek played well but we needed more contributions, We knew Najibullah is a dangerous batsman. We thought we had the game when they needed 60 odd in the last 6 overs. But credit to Najibullah.

Mohammad Nabi: Everyone knows both Mujeeb and Rashid are world class bowlers. They again showed their talent and ability. We plan to take early wickets to be ahead in the game. Everyone knows that we have power hitters in our team. We finished the game really well. Gurbaz tried a lot but couldnt hit them well. Shakib bowled brilliantly.

We batted pretty well to start with, got to a very good score. Came out and bowled reasonably well, we could have done slightly better with the ball. (SKY) The kind of innings he played today, the words will be short. We have seen that with him every now and then. He comes up with suck kinds of knocks. He just comes out and bats fearlessly which is what the team expects from him. Some of the shots he played today, those are not written anywhere in the book. It was very pleasing to watch. Shot selection was also crucial. We know he can play all around the park. We have also informed the group about this as well. Most of the guys are ready to take the opportunity and be ready to bat wherever required. Thats the flexibility we need. Well take those chances. We are going to try and use the right match-ups. India skipper Rohit Sharma