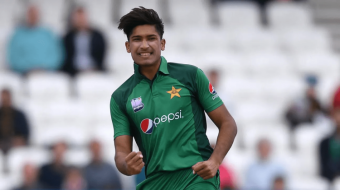 Pakistan has announced the replacement of Shaheen Afridi for the Asia Cup. Afridi has been ruled out of the tournament due to injury. In his place, now 22-year-old young fast bowler Mohammad Hasnain has been included in the team. Hasnain has played 18 T20 Internationals for Pakistan. During this he has 17 wickets to his name. Apart from Hasnain, Naseem Shah, Shahnawaz Dahani, Mohammad Wasim Jr and Haris Rauf are now fast bowlers in the Pakistani team.

The Pakistan Cricket Board said on Monday that Hasnain will travel directly from Britain to the UAE. He is currently playing in The Hundred tournament. Asif Ali, Haider Ali, Iftikhar Ahmed and Usman Qadir will leave for UAE early Tuesday. These players will replace Abdullah Shafiq, Imam-ul-Haq, Mohammad Haris, Salman Ali Agha and Zahid Mahmood in the squad. These players have not been selected for the Asia Cup.

Mohammad Hasnain T20 career, It is being said about Hasnain that he can prove to be more dangerous than Shaheen Afridi. He has the art of swinging the ball both ways just like Afridi. Hasnain has played 82 matches in T20 career so far. During this, he has taken 100 wickets in his name. Apart from the Pakistan national team, he has also played for Quetta Gladiators, Sydney Thunder, Oval Invisible, and Trinbago Knight Riders.

Actually, the bowling action of Mohammad Hasnain was found suspicious during the Big Bash League (BBL). After this, Hasnains action was investigated during the Pakistan Super League (PSL). Hasnain was suspended from bowling at that time. However, after this Hasnain improved his action. Then he got permission from the ICC for bowling.

Pakistans first match will be against India in the Asia Cup starting on August 27. Both these teams have been placed in Group A. There are a total of three teams in Group A, apart from India and Pakistan, the team winning the qualifier round will make it to this group. Sri Lanka, Afghanistan, and Bangladesh have been placed in Group B. A total of 13 matches will be played in this tournament from 27 August to 11 September.