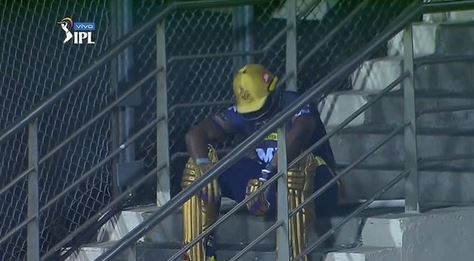 Andre Russell’s disappointed picture after getting out to Sam Curran

After he was dismissed, Andre Russell was seen sitting in a distraught condition.

Andre Russell bludgeoned the Chennai Super Kings (CSK) bowlers to every corner of the stadium on 21st April 2021. In a knock that lasted 22 deliveries, Russell pounded his way to 54. His knock was studded with 3 fours and 6 humongous sixes.

But then, just when it looked as if Russell would continue to hammer the Chennai outfit and take the Kolkata side to an improbable victory, a clever delivery from Sam Curran ended his stay in the middle.

After he was dismissed, Russell was seen sitting on the stairs in a distraught condition. He had not removed his helmet, pads, and gloves even after getting out. And, this image of Russell has melted several hearts.

The Chennai Super Kings beat the Kolkata Knight Riders (KKR) in a cliffhanger of an encounter at the Wankhede Stadium in Mumbai. The MS Dhoni-led side put on a humongous total of 220 runs on the board in their 20 overs. And in reply, in spite of the savage assault from Russell and a 34-ball 66* from Australian Pat Cummins, the Kolkata outfit was bowled out for a total of 202.

The Kolkata Knight Riders will next be seen on the field when they lock horns against the Rajasthan Royals (RR) outfit on 24th April 2021.

You can see the way fans have reacted on Twitter below

I hope @Russell12A had a good nights sleep. I really do. @KKRiders please take care of him. As much as he is brutal with his stroke-making, Andre Russell is a man with a heart of gold. Its morning, and this scene still hurts, hurts very bad. #CSKvsKKR #KKRHaiTaiyaar #IPL2021 pic.twitter.com/QEuN7FOf9A

Here is a clip of the delivery: