5 Achievements Of Wasim Akram That Makes Him Living Legend 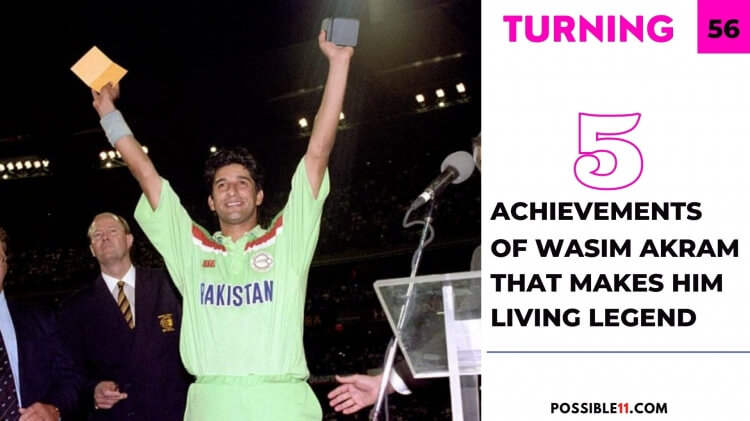 Wasim Akram, one of the greatest fast bowlers, turned 56 on June 3, 2022, and wishes poured from all quarters. The International Cricket Council (ICC) was one of the first to wish former Pakistan skipper Akram. The ICC posted a picture of Wasim Akram on Twitter, mentioning his achievements and a caption saying, “104 Tests, 25 five-wicket hauls and 916 wickets across all formats, “Happy birthday to the legendary Pakistan all-rounder, Wasim Akram!”

Akram has four hat-tricks at the highest level, two in Tests and two in One-Day Internationals (ODIs). His ODI hat-tricks came in 1989 and 1990, both at Sharjah. In 1999, he took two hat-tricks in back-to-back Tests against Sri Lanka and helped Pakistan win the Asian Test Championship.

A second one-day hat-trick in six months for Wasim Akram, as Pakistan beat Australia by 36 runs in the Sharjah final. Wasim finished things off by bowling Merv Hughes, Carl Rackemann and Terry Alderman with consecutive deliveries. Wasim is the only man to have taken two hat-tricks in Tests and one-day internationals.

The greatest left-arm fast bowler of all time. Wasim Akram at this peak was a dream, fast bowler. He could move the ball both ways with ease, and had an awkward bouncer and a superb yorker.

He could also reverse swing the ball both ways too. Akram helped Pakistan to their greatest ever triumph in 1992, when they won the Cricket World Cup. Akram had a superb final, taking two infamous wickets in two balls with a reverse swing to pave the way for Pakistan’s triumph. He is ranked amongst the most successful left-arm bowlers of all time.

First bowler to take 400 wickets in ODIs and Tests

Pakistani allrounder Wasim Akram completed his 400 Test wickets when he had Russell Arnold caught by Mohammad Akram in Sri Lankas second innings at Colombo SSC. He is the first bowler from Pakistan in international cricket to take more than 400 wickets in both ODI and Tests.