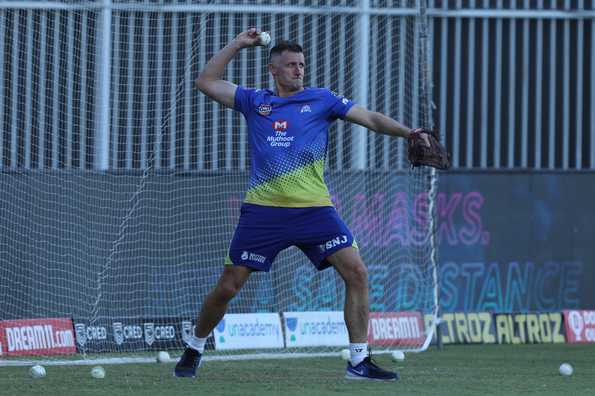 Mike Hussey, the batting coach of Chennai Super Kings, has tested positive for Covid-19 and will have to stay back in India longer than his compatriots and other overseas participants of the postponed IPL 2021 season. The 45-year-old former Australian cricketer is among three members from the CSK camp to have been infected by the virus.

The development was confirmed by CSK CEO Kasi Viswanathan. "Mike has unfortunately contracted Covid and he is still in Delhi. He will have to complete his quarantine protocols before he can leave for home," the CSK official told Cricbuzz on Wednesday (May 5).

L. Balaji, the bowling coach, and a member of the franchise's service staff were others in the CSK bubble to test positive for the virus as the BCCI indefinitely postponed the league following a spate of Covid cases across the league.

Hussey, who has played 79 Tests and 185 ODIs, will continue to be in isolation for 10 days. He is in Delhi's ITC Maurya hotel along with fellow coach Balaji. Both can leave the hotel only after the completion of their quarantine protocols. Viswanathan said the franchise will arrange for Hussey's travel home, via Maldives, once he is through with his quarantine.

8 out of 11 England players return to London

Meanwhile, even as the BCCI and franchises have been making travel arrangements on charter flights for the foreign players, a spokesman for the England board has informed this website that eight of their players have reached home. All those eight players are believed to have flown by commercial flights.

"I can confirm that 8 of the 11 England players in India managed to get on a flight to Heathrow last night and have landed this morning. They will now quarantine in government approved hotels. The remaining three -- - Chris Jordan, David Malan (both Punjab Kings) and Eoin Morgan (Kolkata Knight Riders) should leave India within the next 48 hours," the spokesman said.