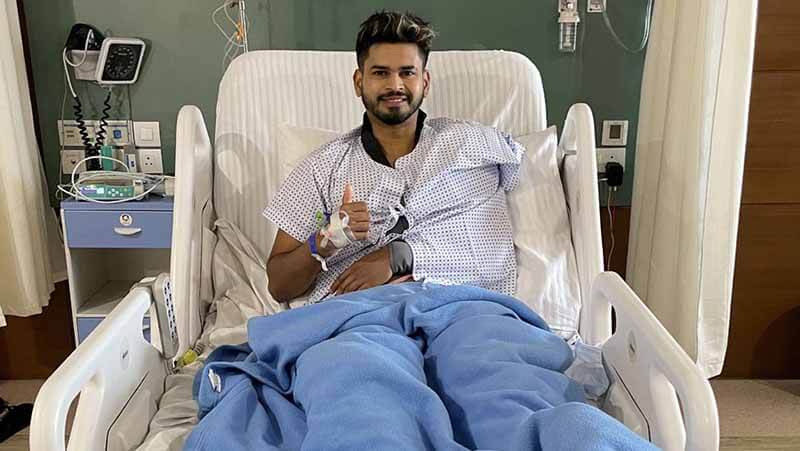 The batsman partially dislocated his shoulder during the first ODI against England, ruling him out of the IPL

Shreyas Iyer has undergone a scheduled surgery to his left shoulder, which he partially dislocated when he landed awkwardly after putting in a dive in the field during the first ODI of India's home series against England last month. In a tweet, Iyer called the surgery "a success", and promised to "be back in no time".

Once the severity of the injury became clear, Iyer had to be ruled out of the IPL, where he was the designated captain of the Delhi Capitals. Rishabh Pant has since been handed the reins of the team, which plays its first match of IPL 2021 on Saturday, in Mumbai against the Chennai Super Kings.

Surgery was a success and with lion-hearted determination, I’ll be back in no time ? Thank you for your wishes ? pic.twitter.com/F9oJQcSLqH

This was the third time since IPL 2020 that Iyer had hurt the left shoulder, having also hurt it during the ODI series in Australia. He was seen grimacing and rolling on the turf at the Maharashtra Cricket Association Stadium in Pune, clutching the shoulder. After brief medical attention, Iyer was rushed out for scans, which revealed he had "subluxation" (partial dislocation) of the shoulder.

Indications that the injury was more serious than initially thought came when Parth Jindal, the Capitals' co-owner, tweeted a couple of days later saying he was "devastated and gutted", wishing Iyer a "quick recovery" as India "needs you in the T20 World Cup".

Iyer was appointed captain of the Delhi franchise (it was called Delhi Daredevils then) during IPL 2018. The team had won only one of their first six matches that season, which led to Gautam Gambhir, the captain at the time, to step down. Iyer, who was then 23 years old, was identified as his successor, three years after the franchise had bought him as an uncapped player.

It has been a successful run for the franchise and Iyer since then, as the team that had gone six seasons - 2013 to 2018 - without reaching the playoffs (or even getting anywhere close to it), finished third and second in 2019 and 2020.

Iyer played a big part with the bat for the Capitals in their run to the final in 2020, played in the UAE, as he totalled 519 runs from 17 innings - making him the fourth-highest run-getter in the tournament - at an average of 34.60 and strike rate of 123.27.